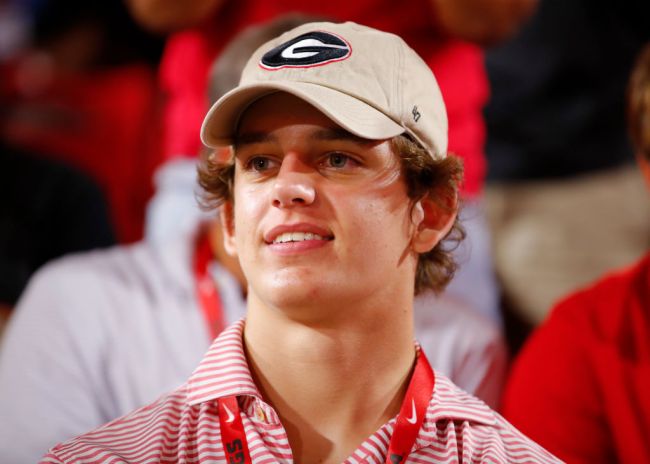 Five-star quarterback Arch Manning is a high school junior and has some time before he decides where he goes to college but it appears that he’s already impressed with at least one school so far in the recruiting process.

Last week, Arch made his way to Athens, Georgia to attend the Bulldogs’ game against South Carolina during a recruiting trip.

According to 247 Sports college football insider Steve Wiltfong Arch “loves” Georgia and really enjoyed himself when he visited the school to see the team play in front of their fans.

On the 247Sports Football Recruiting Podcast, @SWiltfong247 has an in-depth update after Arch Manning's Georgia visit:

"He's got a fun fall on tap, but Georgia has certainly put their best foot forward in this recruitment and they have a great chance…"https://t.co/xtTROaKbW2 pic.twitter.com/vZ3KHtAcEf

“Well, he loves Georgia,”. “I think that he had a fantastic visit there this summer, likes the pro-style offense that (coordinator and quarterbacks) coach (Todd) Monken runs, and told me that Athens is the best college town he’s been to. And then you go to a game on Saturday night against South Carolina, and the fans, the student section obviously made him feel welcome. I was talking a little bit to the family after the trip, they just reiterated what a great town it is at Georgia. And close relationship with (offensive line coach) Matt Luke, Matt Luke obviously the former head coach at Ole Miss where Arch’s family has so many ties. So they know coach Luke, (head coach) Kirby Smart played against Peyton Manning. They’ve known Kirby for a long time. There’s just a lot of connections there that the Manning family has with the Georgia staff, and I think Georgia’s in a terrific position to land Arch but it’s still early in his process and he’s going to take some other visits this fall and just continue to see what he likes.”

Arch is still scheduled to hit up some other big schools this fall but it appears that Georgia has a real shot at landing him according to Wiltfong.