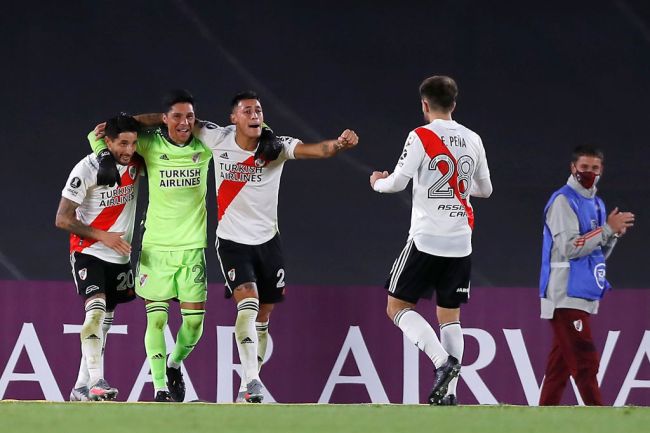 Argentinian soccer club River Plate pulled one of the most improbable victories of all-time on Wednesday night. Teams across the world have dealt with the ramifications of the COVID-19 pandemic, but River Plate was mollywhopped by an outbreak prior to their most recent Copa Libertadores match. Copa Libertadores is the South American cup, equivalent to the UEFA Champions League, so it was a big game.

Twenty players tested positive for the virus and the team had additional players out with injury. That left River Plate to face Colombian side Santa Fe with just 11* healthy players.

The 11 comes with an asterisk because of the goalkeeper situation. All four of the team’s goalies were ruled out. Head coach Marcelo Gallardo hoped to bring two youth team keepers up to the senior squad, but South American soccer body CONMEBOL said tough luck.

Thus, a field player was forced to play in net. And not just any field player. 35-year-old Enzo Pérez was unable to play his regular position in the midfield because of a muscle injury. So he went on as the goalie instead.

Pérez really just went out there and figured it out on the fly.

“My goalkeeper teammates wrote to me, I asked some things too, did some training with the goalkeeping coach and he gave me some advice,” Pérez told ESPN. “With all the adrenaline I had I got a little lost and I always used the penalty spot as a reference.”

He didn’t have to make any major saves, but he held his own between the posts. It was a gutsy performance.

River Plate opened the scoring in the third minute and added a second goal in the sixth. That score held for the full 90 minutes and the COVID-stricken, goalie-barren club won 2-0.

The gutsy performance by River Plate put the club on top of Group D standings in the Copa Libertadores. It also eliminated its opponents from contention.