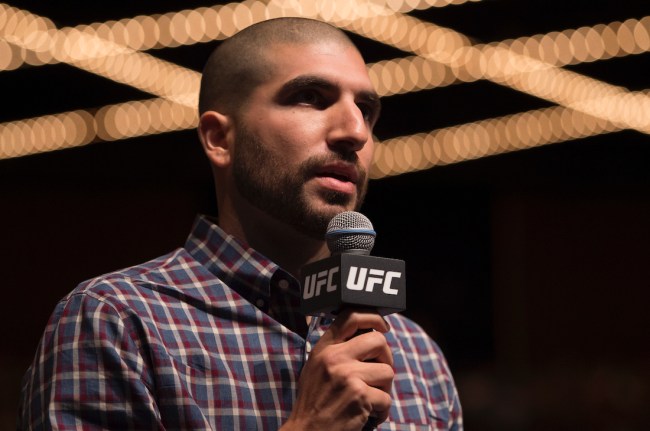 When it comes to covering the UFC, nobody does it better than Ariel Helwani, who has been the premier journalist for the sport for about 15 years. Similar to how Mel Kiper Jr. pretty much created a valuable role for himself by finding a unique niche, Helwani did something similar, and got on the MMA train before lots of other people did.

In that vein, it isn’t completely a stretch to call the guy the “Godfather” of UFC coverage, as he’s had the most experience and has tons of connections in the sport. Those are just a few reasons why Helwani was such a hot commodity last month after leaving ESPN, ultimately joining Vox Media’s SB Nation to take on a role with the brand’s MMA coverage.

But just because he’s onto the next chapter in his professional life, it doesn’t mean that Ariel Helwani isn’t still talking about his old employer. In fact, the journalist joined The Dan Le Batard Show with Stugotz on Monday after witnessing something interesting during Saturday’s UFC 264: Lots and lots of promotion for ESPN’s UFC shows — which is something he feels like never happened during his time with the network.

“What they did on Saturday, the two shows that I had, with Chael [Sonnen] and D.C. [Daniel Cormier], that I helped build, that I was the one promoting more than anyone, I mean all day incessantly. I never got a single plug in my three years there. A single plug on any type of broadcast for three years. I stopped counting at the seventh plug on Saturday for their two new shows.”

“I never got a single plug in my three years there, a SINGLE plug on any type of broadcast. I stopped counting at the 7th plug on Saturday for their two new shows.” — @arielhelwani unloads on his time at ESPN!! 💥💥💥💥💥💥💥
💥 https://t.co/2MdaM3y5jA pic.twitter.com/6mUmsaJyuY

Does Helwani seem petty? Sure. Does it seem warranted? Absolutely.

Look, ESPN is a massive corporation that can chew up and spit out both talent and ideas at a massive scale, so hearing Ariel Helwani complaining about how the network has just now decided to increase its promotion of UFC shows is like David taking on Goliath. And, given the massive contract ESPN has with the UFC, it’s only smart business for the media giant to plug the shows as often as possible.

But Helwani’s candidness is nice to see, especially because, as mentioned above, he’s sort of the Godfather of MMA journalism, having been around it for about 15 years. So excuse him if he has some pride in seeing both himself, the sport and others he’s worked with — like Chael Sonnen and Daniel Cormier — succeed.

Given his gripes with ESPN, there were plenty of people supporting Helwani on Twitter and joining him in firing off at ESPN. Take a look below at some comments from social media.

It’s amazing. ESPN is firing all their legit journalists and replacing them with a few talking heads who don’t know the sports. Stephen A for MMA, Rece Davis for Euros?!??

A very serious hot take while wearing a Luchador mask… I fucking love this SHOW!

Man's got a point. pic.twitter.com/uUn1uilKkd

Having talking heads like Stephen A. Smith cover UFC events seems like a bit much. The guy’s talented, for sure, but he’s overstepping his boundaries by walking into the MMA realm — which Ariel Helwani clearly (and rightfully) feels like he’s got the most experience and knowledge in.

Now that’s he’s no longer part of the ESPN family, though, let’s hope we keep seeing Helwani’s transparency and honesty about the state of the UFC coverage. As one can tell from the video above, it’s some fire content to wake up to on a Monday morning.