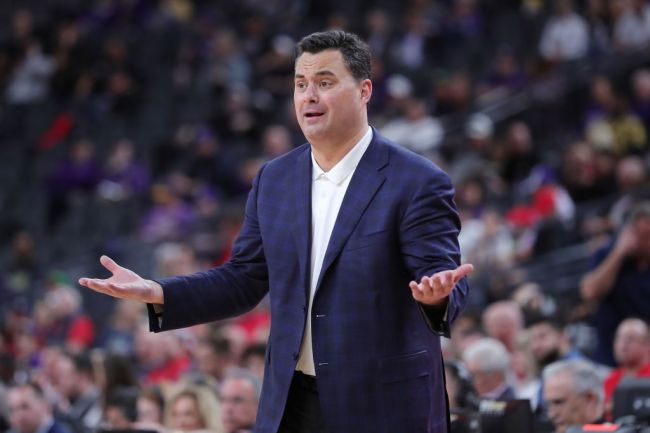 Sean Miller is out as the head coach of Arizona basketball. The Wildcats athletic department decided to part ways with Miller after 12 years, one year before his contract was set to expire. This decision comes amidst an FBI sting and NCAA investigation that doesn’t bode well for the program and he will be owed about $1.5 million in the buyout.

Miller was charged with head coach responsibility for failure to promote atmosphere of compliance. Administration stuck by Miller for 4 years.

Miller will finish his tenure in Tucson with a 309-109 overall record and sits 10th all-time in Pac-12 win total with a 150-68 record in conference. He is a three-time Pac-12 Coach of the Year and led Arizona to five regular-season conference championships, three Pac-12 Tournament titles, seven NCAA tournaments, five sweet sixteens and three Elite Eights. His on-court results are impressive, but his time with the Wildcats will forever be marred by the way in which it ended.

Arizona would have been in the mix for a March Madness bid in 2021, but the program chose to self-impose a postseason ban in late December. It was a proactive measure, hoping to get ahead of impending punishments that will be dolled out by the NCAA for the school’s involvement in college basketball’s bribery scandal.

After a more than four-year long, ongoing investigation neared its conclusion, Arizona received its Notice of Allegations from the NCAA in October. Among the allegations, Miller and the men’s basketball program were accused of five Level I violations— the worst possible. Miller was charged with a failure to promote compliance and the school was slapped with a lack of institutional control, a near death sentence in the NCAA investigation world.

This all comes as a part of a larger, expansive FBI investigation into Division I college basketball, which is summed up really well in an HBO documentary, “The Scheme.” Other programs that are at the forefront of investigations include Kansas, Auburn, which also self-imposed a postseason ban, and LSU, which has seemingly decided to play hardball.

For Arizona specifically, the hot water started to boil in September of 2017, when then-assistant coach Book Richardson was arrested by the FBI and pleaded guilty to a bribery charge. During his trial, he was accused of accepting (at least) $20,000 to steer Wildcat players to aspiring sports agent Christian Dawkins. During Dawkins’ trial, prosecutors played a call that heard Richardson tell Dawkins that Miller was paying $10,000 a month for former player DeAndre Ayton to play for his team. Things got even worse in February of 2019 when then-assistant Mark Phelps was ultimately fired for allegedly helping one-time Arizona commit Shareef O’Neal (yes, Shaq’s son) with an online class.

Miller has denied any wrongdoing on multiple occasions and the school has stood by him along the way. No matter how bad the picture looked for Miller, no matter how close the guillotine seemingly got to his neck, the school kept him around. However, with the 2021 season having come to a close on Monday, it was time to either cut ties or double down. After four years of chaos, Arizona chose the former.

The decision is a monumental moment in the program’s history, and for college basketball in general. Kansas recently gave head coach Bill Self a rolling, lifetime extension, LSU continues to back head coach Will Wade in his denial of wrongdoing, and Bruce Pearl remains in his position at Auburn. Other programs understand, like most college sports fans, that the issue much greater than individual schools. It is a widespread, rampant problem that speaks to the fact that you have to pay to play. To compete in the NCAA, you have to have the top athletes. To recruit the top athletes, more than likely, it will cost the program and its bagmen a significant price tag.

I mean, do we really think that Zion Williamson wasn’t paid a single cent in any way, shape or form to attend Duke? If you really, truly believe in your heart of hearts that the nation’s top recruits choose a school based only on the coaching staff, culture and roster, you are delusional. Thus, Arizona’s decision to fire Miller with one year left on his contract is a move that is intended to save face and keep the program’s looming punishments to a minimum.

The Wildcats can play dumb and pretend that they fired the root of the problem as soon as it received notice from the NCAA. It appears that they plan to cooperate, which historically does not work out well for schools under investigation— just look at how things were handled with the Ole Miss athletic department. You don’t have to think it’s fair and you don’t have to like them (all of the homies hate Will Wade), but playing the villain seems to be the best route when it comes to the NCAA. Deny, deny, deny, until the governing body can prove that it has you in a stranglehold. In this case, perhaps it has the Wildcats close to tapping and left them with no other option.

Arizona believes that a world of hurt was/is coming their way, and chose to distance itself from Miller instead of playing hardball with college sports’ governing body. That decision may have been understandable, though wrong, back in 2017, or even as late as 2019. But to stand by him this long and then decide to move on (and pay him $1.5 million in the process), seems like the program is grasping at straws and rolling over.

Whoever takes over in Miller’s could inherit a strong team for 2021-22, unless the coaching change and looming punishments don’t prompt a mass exodus of players into the transfer portal. The Wildcats went 17-9 last season in a conference that ended up being much stronger than people thought. Should Arizona’s roster return, it could see seven of its nine top scorers back next year, in addition to a trio of top-100 guards that signed in November.

No matter what happens, the school’s decision to fire Miller isn’t a positive sign for what is coming next. Hold onto your hats.