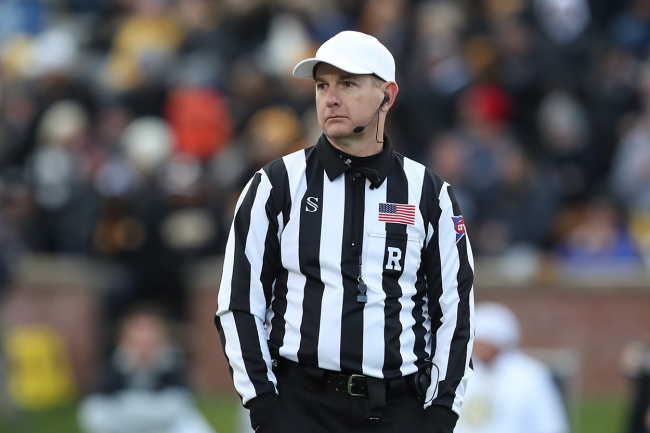 Arkansas fans were not happy with the officiating during the Razorbacks’ 42-35 loss to Alabama on Saturday. In turn, a Northwest Arkansas barbecue restaurant is vowing not to serve conference officials until Arkansas beats the Crimson Tide.

These @SECOfficiating reviews have been an absolute joke, no one from the SEC office is allowed at Wrights until we beat bama in football

So basically, if you are a referee in the Southeastern Conference, you will never be able to eat at Wright’s Barbecue. Because the Hogs ain’t beating Bama until Saban is in the grave and Saban is going to live forever.

Wright’s Barbecue’s decision comes after a number of calls were made over the weekend that upset the Woo Pig faithful. One such play came when running back Dominique Johnson appeared to score but was marked short.

The call was overturned and it was called a touchdown, so it didn’t end up mattering.

Dominique Johnson was just standing entirely in the end zone and was marked a half yard short.

(the call was reversed but they still really tried to pull that off 💀) pic.twitter.com/4zIAvnMBf9

Another controversial (non-)decision came when Alabama’s defense was not called for targeting on quarterback K.J. Jefferson as he was running out of bounds.

If an Arkansas player does that to Bryce Young, no doubt in my mind it’s targeting. This is embarrassing @SEC #BamaPrivilege pic.twitter.com/jNBiRzIVVt

Add on a questionable intentional grounding call and a few overlooked defensive plays that could have been called for pass interference, and even the CBS broadcast team was confused. However, what was called was called and the same could be said about every game ever.

That didn’t stop Arkansas fans from being extremely #MadOnline. Wright’s Barbecue, was one of them.

While Wright’s bit is funny, it’s pretty impossible to enforce. Unless there is someone with a great knowledge of SEC officiating stands at the door to check IDs, what is stopping an official from walking in and eating?

If I were an SEC official, Wright’s announcement would only make me want to eat there more. I would walk in, unrecognized, eat a meal, and then let everybody know afterward that I ate a meal there despite being banned.

Great try, Wright’s. It was funny, but you have become just like the rest of the Arkansas fanbase— insufferably complaining into the abyss.