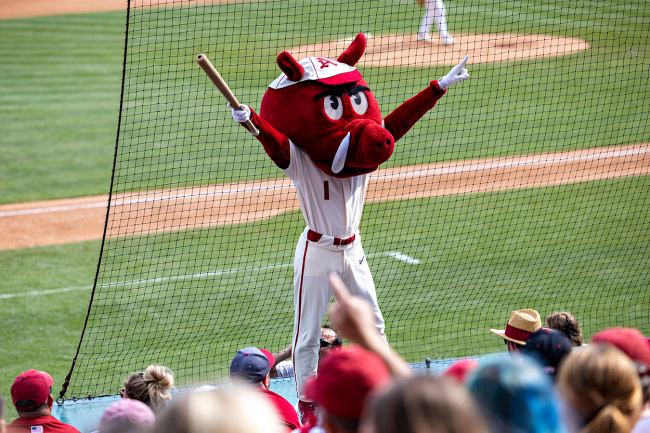 Arkansas baseball is on an absolute tear. After being ranked as high as No. 2 in the country during the regular season, the Razorbacks suffered a late-season slump that pushed them out of a Regional host.

As a result, the Hogs earned a two-seed in a wild Oklahoma State Regional and won. And then, after advancing out of Stillwater, Arkansas swept UNC in a best-of-three game Super Regional series in Chapel Hill and earned a College World Series birth.

It has been quite the turnaround. The Razorbacks got extremely hot at the right time.

Their fanbase, however, is still managing to find something to complain about. The Hogs never fail to be the loudest in the room, but often forget that when you point a finger at someone else, four fingers point back at you.

Mike Irwin is the perfect example. Irwin, a sports reporter/analyst for KNWA/KARK since 2012, has been covering Arkansas sports for 46 years.

In turn, he should know full well how his fanbase acts. Razorbacks fans, particularly at Baum-Walker Stadium, are ruthless. They, like every other fanbase in the country, take every opportunity to get after the visiting team.

Whether the fans are chirping in the outfield, heckling from behind home plate, or shouting from the upper deck, they are not particularly friendly toward opponents. (I have been to three games in Fayetteville, I know this first hand.)

And yet, Mike Irwin is extremely #MadOnline about a Tar Heels fan who flipped double birds to a Razorback player on Sunday.

Get this — he wants the “fan” BANNED from ever attending another North Carolina baseball game. Over a pair of middle fingers.

The responsibility of being a host school in the NCAA baseball tournament should be taken seriously with zero tolerance for this type of behavior. The University of North Carolina should be embarrassed by this. This "fan" should be banned from future games there. pic.twitter.com/ebExHuP3QE

The hypocrisy in Irwin’s very angry tweet is vast. If his subjective rules were to apply to Arkansas’ fanbase, there would be a significantly smaller crowd in the stands because many of them would be banned.

I was gonna say. This is funny. We even have a gif! Sorry Mike. I like your coverage just think you’re off the mark here pic.twitter.com/gbKPlETeLs

We have several of those at every sporting event here in Arkansas. No need for NC to be embarrassed. U should have heard our fans at the Texas football game. 😅 🤷‍♂️ like it or not it’s at most sporting events at all programs.

You must not have ever been to a Razorback game in person. You can see that every home Saturday in Razorback Stadium.

I get your frustrated, but let’s calm down a little bit here. I’m going to go out on a limb and say every fan base has “that” fan.

My how quickly they forget…

As a Razorback fan, who cares?! There are far worse things for you to complain about, Mike. This just seems like another day at the ballpark pic.twitter.com/MXKpmInfEQ

Tough beat for Irwin. He is the pot calling the kettle black.