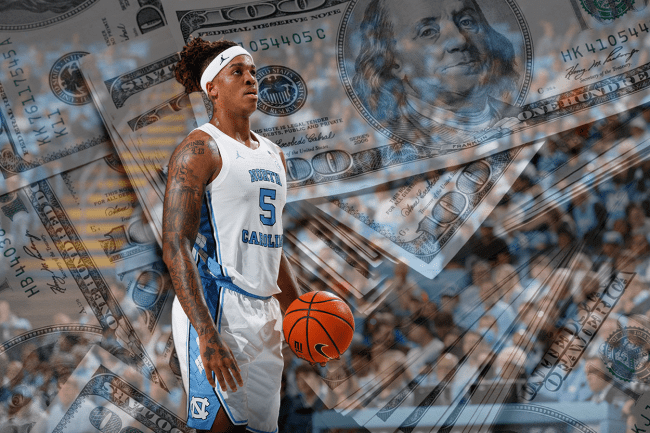 North Carolina center Armando Bacot Jr. is one of the best college basketball players in the country. He could have gone pro after leading the Tar Heels to the National Championship game last season, but chose to return for his senior year.

The decision, in part, came down to money.

When the NCAA introduced its “interim” rules on Name, Image and Likeness almost a year ago, it allowed college athletes to make money while in school. Bacot, as one of the most-recognizable figures in his sport, is cashing-in.

He landed a recurring, paid actor role with a popular Netflix series, has a five-figure deal with Jimmy’s Damous Seafood, does promotional work for a social-services charity and signed deals with a thoroughbred farm in Kentucky, a technology consulting firm and Topps trading cards. In addition, Bacot has created more than 100 videos on Cameo at at least $95 per video and has a burger named after him at a restaurant in Chapel Hill.

According to Sports Illustrated, Bacot also made $21,000 selling T-shirts from March 1 through June 8. And that isn’t all.

Bacot told Sports Illustrated that between March and June alone, he was offered multiple deals “pushing the six-figure mark.” His opportunities are not limited.

In turn, the ability to make some cold, hard cash while trying to bring UNC back to the national championship and getting his degree allowed Bacot to stay out of the NBA Draft pool for another year. It was a no-brainer, he says.

As for how much money Armando Bacot is set to make through NIL, it’s signficant.

His mom told Sports Illustrated that she estimates her son’s NIL income will be “definitely past half a million” just this year alone. Not bad for a 22-year-old amateur athlete!

Despite his lucrative NIL income, Bacot is not happy with how the NCAA is handling it all. He sees a lot of issues with the current NIL model.

“Something just don’t sit right with me with some players making more money than [their] coaches,” said Bacot to Sports Illustrated. “I don’t know if I’m a fan of that. … I don’t think that’s a good thing. And I think it’s too easy for players to move around and schools bid on them — I don’t think that’s good for college.

“I think [there] should be some type of rules where you can’t recruit a player and say, ‘If you come here, I’ll give you … .’ Especially in the transfer portal. I don’t think you should be able to bid on players.”

However, he does not know what the solution would be. Bacot sees problems, but doesn’t know how the NCAA can stop the current format of NIL from hurting the sport.

“I really don’t know,” told Bacot to Sports Illustrated. “I guess that’s why you see so many changes in the NCAA — people stepping down and leaving, and coaches leaving — because it’s just the wild, Wild West.”

The dichotomy of Bacot’s situation is interesting. He is amongst the most profitable college basketball players, but