Everybody Stay Calm, But Army Is On Pace To Break Its Single-Season Passing Touchdown Record 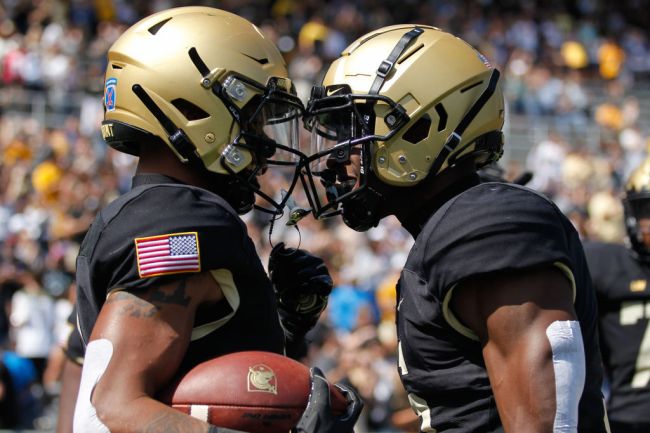 Throughout all of 2020, the Army Black Knights football team threw the ball 76 total times. They completed 35 passes and threw only four touchdowns.

Now, just three games into the 2021 season, the Black Knights have tied their passing touchdown total from a year ago at 4.

Army hosted Connecticut on Saturday for what could be considered more of a cupcake game than FCS Southeast on NCAA 14. At 0-3 by a combined total of 28-132, the Huskies are truly abysmal. They could legitimately be the worst FBS program of all-time.

Nevertheless, our military does not overlook any single opponent. Army was ready to beat the face off of UConn and that’s exactly what it did.

The Black Knights went into the locker room at halftime with a 42-0 lead.

Things got started early and Army capitalized on a huge run from one of its 13 ballcarriers.

Brandon Walters UP THE SIDELINE!

After a 58-yard gain, Walters has @ArmyWP_Football knocking on the door pic.twitter.com/AlAbpfzXae

And then, with a 7-0 lead, the triple option, ground-first offense decided to turn to the air. It was one of the easiest touchdowns that Army will score all year. UConn’s defense crashed, its strong-side linebacker was long gone, and the middle linebacker got stuck trying to cover the tight end streaking over the middle.

He, of course, was too late and could not. Wide receiver Isaiah Alston, who caught only the one pass on the year, was wide open for the touchdown.

Hard to be more wide open than that!

Army’s fourth touchdown pass of the season came off of the arm of primary quarterback Christian Anderson. He has thrown three of the four in 2021 and has completed eight of his ten passes.

By that math, Anderson has thrown a touchdown pass on more than one third of his completions. Not bad.

The Black Knights have not thrown more than seven touchdowns in a single season since 2015:

With 10.5 games remaining, it looks like Jeff Monken’s program might be set to break a record through the air. The Black Knights threw for a team-high 10 touchdowns in 2015. Only six more!