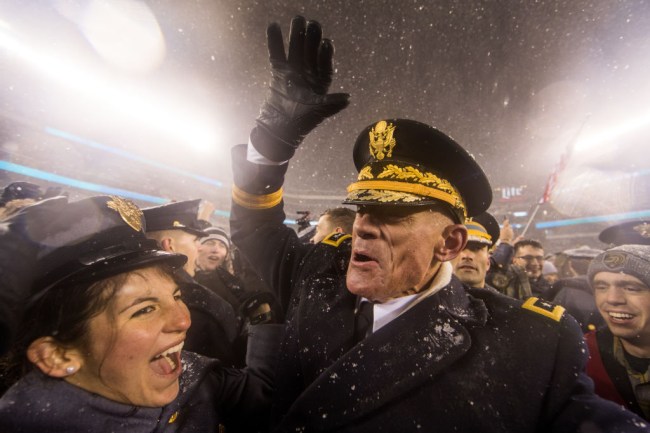 In commemoration of the 100th anniversary of World War I, the Army Black Knights are pulling out all the stops for their much anticipated annual matchup against Navy this upcoming Saturday.

The Black Knights will veer from the tradition of honoring a military event or particular unit for the game, and instead honor the legacy of the U.S. Army’s first combat unit, the 1st Infantry Division aka “The Big Red One” aka “The Fighting First.”

Via Against All Enemies:

Clad in all black with red details, the uniform color honors 1886 graduate of West Point, John “Black Jack” Pershing. A famed individual within the military community and those who consider themselves military history buffs, Pershing became the first four-star general in the country was and commanded the American Expeditionary Forces during WWI.

The collar insignia represent the bronze collar disks worn by enlisted soldiers in the First Division. The flag on the back of the helmet is an accurate representation of the World War I era flag, featuring 48 stars (sans Alaska and Hawaii).

The press release explains how the 1st Infantry Division came together under President Woodrow Wilson:

President Woodrow Wilson promised the Allies he would send “a division” to France immediately, but the Army had no such divisions. The United States quickly ordered four infantry and three artillery regiments from the Mexican border in Texas to Hoboken, N.J., to board transports to France. That group of seven regiments joined together to officially form the “1st Expeditionary Division,” later the 1st Infantry Division, under Brigadier General William L. Sibert on June 12, 1917.  With more than 28,000 men, the “Big Red One,” as the division was later nicknamed from its shoulder sleeve insignia, was twice the size of either the allied or German divisions on the Western Front.

Navy’s armor gives Army’s a run for its money. The Naval Academy’s helmets will feature it’s famous goat mascot, which dates back to 1893:

Navy's helmet for this year's Army game is the goat pic.twitter.com/KBnCC6Q2Hj