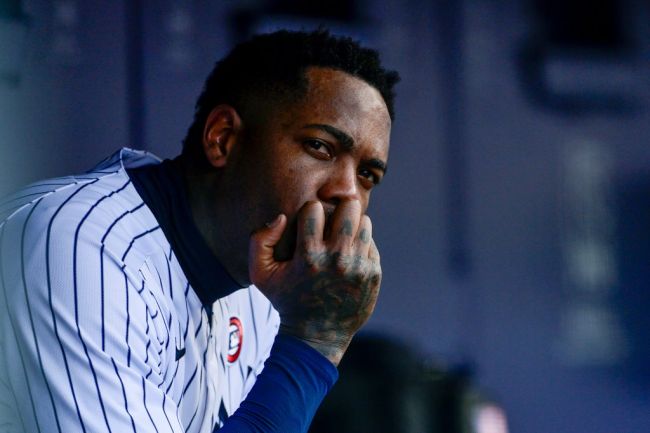 Yankees closer Aroldis Chapman might be removed from his role amid recent struggles. The 33-year-old fireballer has strung together a series of awful outings as New York continues to slump, but he vowed to silence the doubt.

Chapman took to Instagram on Monday night and declared his intentions to “shut up many mouths.”

Prior to June 3, Chapman’s ERA was 0.41 in 22 appearances. Since then, he has posted a 18.90 ERA in 10 outings. It has been an abysmal month and he has blown four save opportunities.

I can't believe my eyes pic.twitter.com/BIdmEhbXc0

The most recent blown opportunity came when Chapman lost a lead against the Mets on Sunday. He was booed off of the mound in the Bronx.

Pete Alonso leads off the seventh with a game-tying homer off Aroldis Chapman. Yankee Stadium is going nuts…and not because of the Yankees fans.

Chapman’s brutal stretch comes with interesting timing. Major League Baseball has cracked down on the use of foreign substances on the mound and it began in June.

Thus, as Chapman continues to slide, questions have begun to surround his “sticky stuff” usage. The advantage to using a sticky substance comes with spin rate.

By holding onto the ball longer with increased grip, it allows pitchers to get an extra “flick” on the ball. That extra “flick” makes the ball spin at a greater pace. The more that the ball spins, the more it moves and the harder it is to hit.

Chapman has vehemently denied using any sticky stuff and his manager has pointed to a mechanical issue. Still, there has been a numerical parallel between the struggles and crackdown.

Whether it is a direct correlation or not, Chapman has been the statistical worst reliever in baseball since the MLB started to eradicate illegal substances.

Whatever the issue with their closer is, the Yankees need to get to the bottom of it and need to do so sooner than later. New York is only one win above .500 and sits third in the AL East rankings, ahead of only a horrendous Baltimore Orioles team.

Chapman has gone through similar periods of poor success in the past. In each instance, he has bounced back to find his pitches again. However, none of his struggles have been this bad.

Things are going so poorly that he may lose his role.

Whether Chapman will be able to rediscover his stuff without the stuff will be an interesting look at what could be a telling sign that the MLB may have actually done something right by cracking down on foreign substances. Even if how they decided to crackdown was handled as poorly as it was.