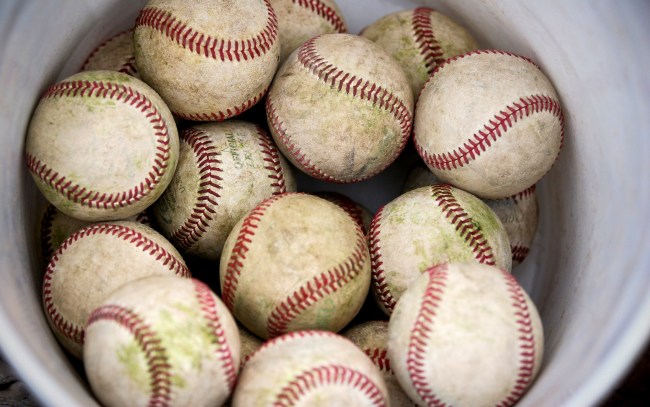 By now all of us sports fans are pretty bored, sitting around in self-isolation, no games to watch or play.

Oh, sure, we could take a “quarantine vacation” by sleeping in the guest room, but… no, wait, we can’t do that.

We could always perform some self-surgery, but again, that’s not really a great idea either.

What is a great idea, at least if you are an Oakland A’s prospect like Noah Vaughan, and you’re married to a former Texas A&M pitcher, like say, Riley Sartain-Vaughan, you go out in the driveway and take turns pitching to one another.

What you do not do, assuming you take your wife yard, is perform a savage, disrepectful bat flip after you do it… like Noah did.

“When your wife’s pitching is the closest thing you can get to a live at bat at the moment… #sleepingonthecouch,” Noah wrote about his showboating.

Now, if you are like me (and every other married guy on the planet), you know that doing what Noah did, on camera, then posting it on social media, is going to result in some form of payback from the wife.

Luckily for Riley Sartain-Vaughan, she’s no slouch on the mound and was able to make Noah look silly.

Filthy, for sure, but that wasn’t enough for Riley. No sir.

When it was her turn to bat, take a wild guess what happened?

“Lesson learned: Don’t bat flip your wife @noah_vaughan11,” Riley wrote alongside video of her taking Noah deep then performing her own glorious bat flip from hell.

“She threw that with anger 😂😂😂😂😂,” viewer Samuel Martinez commented.

Yes, she did. She most certainly did. And I love it.