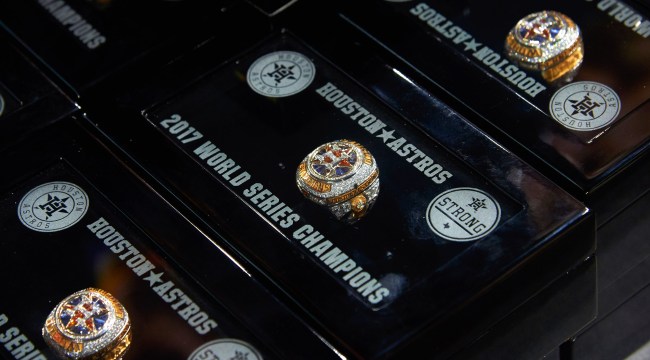 Even when they aren’t doing anything even remotely related to actual baseball, the Houston Astros organization simply cannot get out of its own way.

Between the inexplicable claims the franchise and its owner Jim Crane have been making in defending themselves in the numerous lawsuits currently in progress against them and now blocking the auction of former scout David Brito’s tainted 2017 World Series ring, the proceeds of which would have gone to pandemic relief efforts, the Astros continue to appear completely clueless.

Citing a clause that apparently everyone who received an Astros World Series ring in 2017, the team claims that they have right of first refusal with anyone who attempts to sell their tainted ring.

The arbor of the Astros Championship ring features the organization’s 2017 rallying cry, “Earned History.” It is placed so that, when shaking another hand, the recipient can see clearly that the Astros earned their World Series title and place in history. #khou #HouNews pic.twitter.com/FNHzuQ9848

Making this move by the Astros look even worse, the ring, which the team says it has the right to buy back for ONE DOLLAR was expected to sell for as high as $60,000 with all of the proceeds going to the CAMCare Foundation for COVID-19 related causes at New Jersey hospitals and health care centers.

The sale was being conducted by Goldin Auctions, whose founder and CEO Ken Goldin spoke to TMZ about the call he received from the Astros ‘head of human resources and vice president of legal affairs.

After informing them that all of the proceeds of the auction had already been advertised as going to several charities and hospitals, he says the Astros brass told him, “We don’t care what the reason is, we do enough for charity ourselves and we want our contract honored.”

Ironically, the Astros threatened Goldin with criminal action if he were to go ahead with the sale of a “stolen ring.”