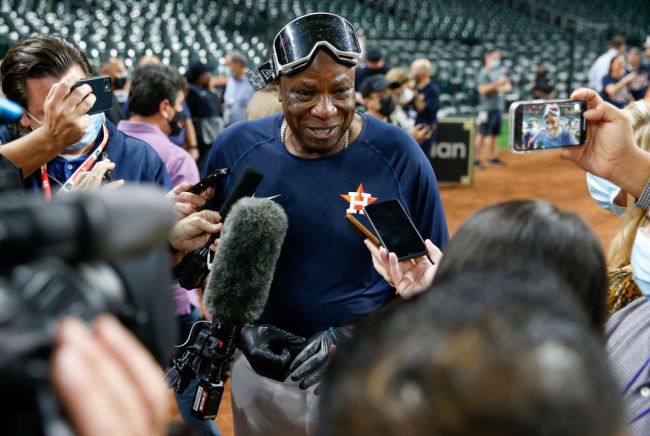 To the surprise of almost nobody, the Houston Astros clinched the American League West on Thursday night. At the helm of the team is manager Dusty Baker.

Baker has been with the club since 2020 after 24 years between the Giants, Cubs, Reds and Nationals. He became the first MLB manager to lead five division titles with five different teams last season, but he has never won a World Series as skipper.

In fact, he has only reached the World Series once, in 2002.

This year, however, could be different. Despite the hatred from opposing fans and teams around the country, Houston looks like it might be the best team in baseball this season.

Baker seems to think so too.

The 72-year-old joined his team in the locker room to celebrate the division title and shared in the champagne. While everyone else drank from the bottle or cups, Baker had a different idea.

He went for the “shoey.”

If you are unfamiliar with the “shoey,” it’s pretty simple:

Drinking champagne from a lady’s slipper became a symbol of decadence in the early 20th century. It is believed to have originated in 1902 at a high-class brothel in Chicago.

When a dancer’s slipper fell to the floor, a member of Prince Henry of Prussia’s entourage picked it up and used it as a means of champagne-drinking utensil. The practice has since evolved into a much less elegant thing— people just crush booze from a shoe, hence, the “shoey.”

Well, Baker decided to get in on the trend. He poured champagne into a cleat, which did not appear to be his own, and drank from the heel.

Love or hate the Astros, love or hate Baker, you have to love this move. What a legend.