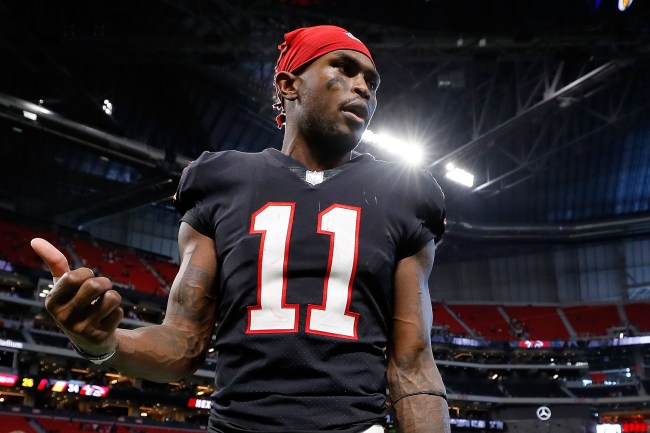 Good news for Atlanta Falcons fans as their five-time Pro Bowl wide receiver Julio Jones will be in red and black next season, as the 29-year-old has come to a contract agreement with the organization on the eve of training camp.

Jones skipped the Falcons’ mandatory minicamp and OTAs in an attempt to fatten up his five-year, $71 million contract that runs through 2020. The Falcons converted nearly $2 million of Jones’ 2019 salary into a bonus for this year, according to the Atlantic.

“We have had continued dialogue all offseason with Julio and his representation. We have come to an agreement with Julio, and we will re-address everything in 2019. I appreciate everyone’s hard work and communication on this. This adjustment does not impede us from working on other extensions with other key members of our football team. We will continue to work on those contracts going forward.”

My 10 year old son is a huge fan. The pic below has been his long time screen saver.

Tonight, he told me he is changing it to a solo shot of @M_Ryan02 or @devontafreeman.

Just thought you should know.

I can’t believe a grown man wrote this.

Thanks Buck…that oughtta do it. Hold out over.

Following the agreement, the Falcons organization appeared to mock Buck by posting the below:

Just in case anyone needs a new phone wallpaper or desktop screensaver… pic.twitter.com/Mj2EeoLhBQ