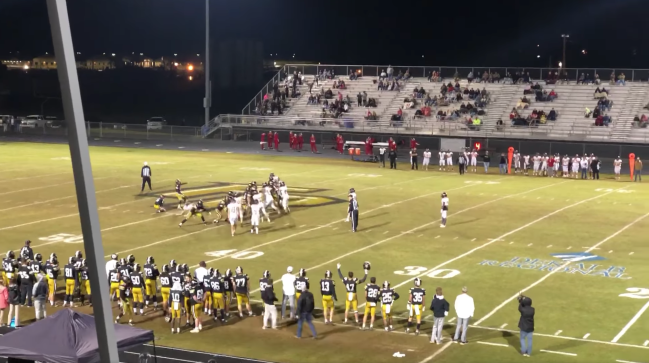 Auburn football does not have to worry about the kicker position beyond this season. The Tigers landed a commitment from Alex McPherson, the nation’s top recruit in the class of 2022, and he has a serious leg.

McPherson, who kicks for Fort Payne High School in Alabama, has offers from nearly every school in the SEC but chose to stay and play in his home state. Before heading off to Auburn, the 5-foot-10, 155-pound senior is leaving his mark on the high school level.

A few weeks ago, the Wildcats sent McPherson out to attempt a 70-YARD field goal. If it had gone through the uprights, it not only would have set an Alabama state record, but it would have been longer than Justin Tucker’s NFL record 66-yarder.

He missed, but he got awwwwwwwwwwwwffffffuuuuuuuuuullllllyyyyy close.

Last night, two weeks after his attempt from 70 yards, McPherson made four field goals in a 32-7 win over North Jackson. However, one of his four kicks stood out and made history.

He got the call to attempt a 61-yard try and banged it between the uprights.

McPherson’s 61-yard make set the state record for the longest field goal in Alabama high school history that “included a snap, hold and kick against pressure.” Sage Ledbetter of Auburn High school made a 61-yarder in 2015 but it came on a free kick.

With the record-setting kick on Friday, McPherson broke the previous field-goal mark that was set by a notable name. Alex bested his older brother Evan, who is now in the NFL with the Cincinnati Bengals.

The McPherson family now holds the longest and second-longest kicks in Alabama high school history. What are they feeding those kids?!