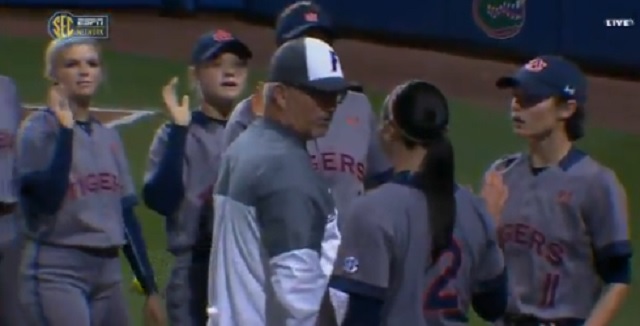 After yesterday’s Auburn-Florida softball game, Tigers shortstop Haley Fagan got into it with Florida head coach Tim Walton in the handshake line.

Watch as Fagan snubbed Walton by leaving him hanging which led to Walton responding by giving her a little shove on the shoulder.

Things got heated in the postgame handshake line after Auburn's win over Florida pic.twitter.com/pASh5nV5Io

Fagan and Walton have a bit of history, as Fagan’s two sisters, Kasey and Sami, both played for Florida before being dismissed by Walton prior to a NCAA tournament game in 2012 due to an “altercation on the team”.

Walton later apologized for the incident.

My intent was to give a high-five to each opposing player as we do after every game. Apparently, her hand wasn’t up as I said ‘good game’ and I touched her shoulder. I should have paid close attention and did not intend to upset her.”