NFL’s Austin Ekeler On Making Gaming History, Building Relationships With Fans, And Why He Refuses To Play ‘Madden’ 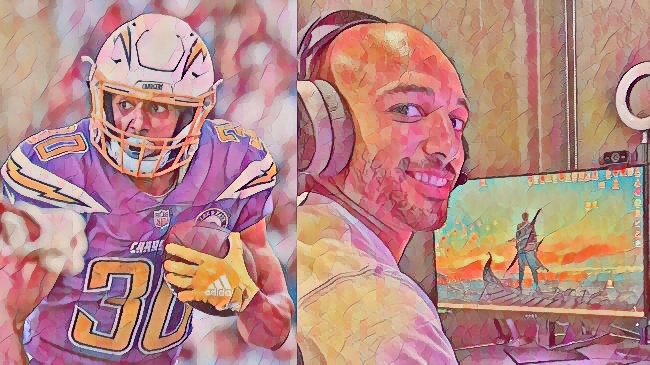 Los Angeles Chargers running back Austin Ekeler is a study in mold-breaking.

The Western State (CO) product is just one of 54 Division II products to secure an NFL roster spot this season, but unlike the vast majority of DII players to beat the odds, the 26-year-old is projected to be a top 2 or 3 fantasy running back after signing a four-year $24.5 million contract extension with the Chargers in March.

In addition, Ekeler is 195 pounds—a feather by NFL standards—but earned the nickname “Pound for Pound” for his reputation of being one of the strongest dudes in the league. Here is Austin repping 315 on the bench like it’s a broomstick. Gulp.

So it makes perfect sense that Ekeler, a self-proclaimed “terrible” gamer, just became the first NFL athlete to serve as an ambassador for SteelSeries, the worldwide leader in gaming and esports peripherals and the original esports brand.

Happy to officially announce I’ve partnered with @SteelSeries as one of their brand ambassadors. They make some of the top tier gaming peripherals out there & I’ve been using their products since I started streaming. Use code ‘AUSTIN’ for a discount on https://t.co/U0GQiM1eVG 🤙🏽 pic.twitter.com/CuOQGz5wwB

We sat down with the Chargers star and co-founder of Gridiron Gaming Group (GGG) to talk about his SteelSeries partnership, the burgeoning era of individual brand-building in sports, and why he hasn’t played Madden in a decade.

On a new era of individual brand-building:

“People used to get made fun of if they started a rap career outside of football. Now people are encouraging that. It’s so available to everyone that’s why it’s become so mainstream. Before there wasn’t really a platform. Athletes do more than just play football, and people have a hard time getting their mind around that because they only see us on Sundays. That was the old school view.

We’re still trying to be the best football players we can, but at the same time branding ourselves so we can transition out of football too. With my streaming and SteelSeries, that’s one of the avenues I’m trying to use to carry on some type of career path and thing I’m passionate about outside of football.”

“I’m terrible at gaming. The only thing I’m competitive at is League of Legends. Tyreek Hill is an amazing gamer. I played against him in a bunch of tournaments and got destroyed by him.

JuJu got huge on Twitch because he played with Drake and Ninja. They, like, broke Twitch. And they rode that for a little bit. I’m not even sure if he still streams.”

On not playing Madden in over a decade:

“I play the real life Madden so I need a break from football. Back in 2007 was the last year I played.”

“I can’t play football forever so at some point I’m going to be detached from the sport. But gaming I can play forever and I can compete, and it goes back to that social atmosphere. So I can’t give up gaming forever. No chance.”

Given all he’s accomplished in the space, can anyone blame him?