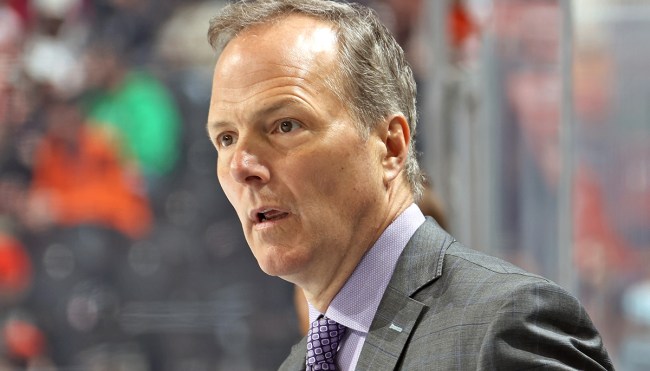 The Avalanche and the Lightning needed overtime to decide the outcome of their Game 4 showdown on Wednesday night, and we were treated to one of the more confusing and anticlimatic goals in the history of the Stanley Cup Finals after Colorado’s Nazem Kadri (and basically everyone else on the ice) needed a few seconds to realize he’d scored the game-winning goal by netting a wrister that got wedged in the top of the net.

The goal—which had shades of Patrick Kane’s title-clinching OT tally against the Flyers in 2010—was a particularly brutal development for a Tampa Bay squad that is now one game away from elimination after falling into a 3-1 hole in the series.

As a result, it made sense that Jon Cooper seemed fairly emotional while speaking with the media after the contest. However, things took an interesting turn when he said “This one’s gonna sting much more than others, just because I think it was potentially taken…” before trailing off and asserting “we probably still should be playing” prior to ending the press conference after fielding a single question (although he promised to share more of his thoughts on Thursday).

If the brief presser left you somewhat perplexed, you certainly weren’t alone. However, it didn’t take long for people to uncover the source of frustration, as replays showed the on-ice officials missed a fairly blatant too many men penalty that would’ve not only negated the goal but put Tampa Bay on the power play with a chance to tie the series.

“I'm gonna have to speak tomorrow… You’re gonna see what I mean when you see the winning goal. My heart breaks for the players because we probably should still be playing”

– An emotional Jon Cooper after only taking one question post-game. pic.twitter.com/1XHPHRwD5x

Avalanche had 6 men on the ice when they scored the OT winner. pic.twitter.com/KvM41kvSWs

Here’s the video from @SportsCenter pic.twitter.com/rqwMmIJcZD

Game sheet says there were six Avalanche players on the ice when Kadri’s OT winner was scored. pic.twitter.com/kufhJ8X0hm

It’s worth noting this unfolded just a few days after Cooper questioned if the NHL needs to rethink how goals are reviewed due to his frustration with the logistics of challenging a call, so it’s safe to assume the league will have at least a couple of issues to seriously consider addressing in the offseason.