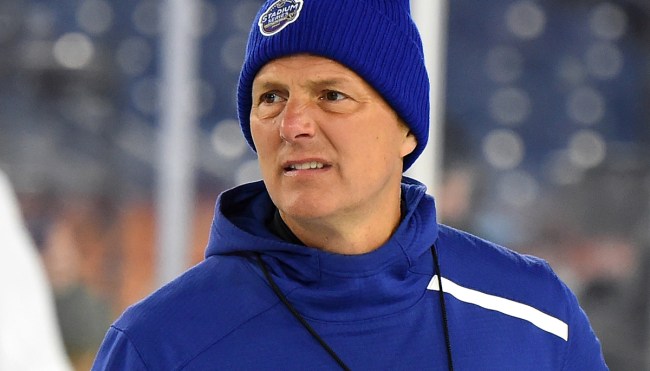 The Tampa Bay Lightning were in fairly dire need of a win on Monday night when they headed into Game 3 of the Stanley Cup finals in a 2-0 hole after being trounced 7-0 by the Avalanche on Saturday, and the back-to-back defending champions got exactly that by walking away with a 6-2 victory over Colorado.

The game may not have been a close one, but that didn’t mean it wasn’t able to produce a little bit of controversy thanks to what unfolded toward the start.

It initially looked like Valeri Nichushkin gave the Avs a 1-0 lead by opening up the scoring around five minutes into the first period. However, the goal was overturned following a lengthy review that led to officials determining the puck had snuck over the blue line prior to a play that was ultimately ruled offside.

The Lightning video staff thinks the play is offside, so Jon Cooper challenges.

Cooper and the Lightning are 1-0 this postseason (missed stoppage). Coaches are 2-1 on offside plays so far in the playoffs. pic.twitter.com/aa7BuLABTU

While Jon Cooper’s decision to deploy a coach’s challenge paid off, the Lightning appeared to be gifted an inordinate amount of time to determine whether or not they wanted officials to review the play in the first place; according to ESPN, Colorado head coach Jared Bednar estimated “It was probably three times the length we normally get” while addressing the unusually long wait after the game.

This is far from the first time the NHL’s review system has found itself under scrutiny, and it turns out there’s another critic in the form of the coach who used it to his advantage during the showdown.

Cooper actually sympathized with the Avalanche when he chimed in following the contest and implied the league needs to reconsider its current approach to replays due to the limitations teams are forced to deal with while debating whether or not they should challenge a goal.

“We’re at the mercy of the replays we get. So somebody could unplug something up top, we can have no replays, and something that is a black and white call might be missed…

At the very end, an angle came in. It was an end zone angle and I don’t know where we got it from. The guys inside couldn’t tell if it was white [ice] or if it was grainy. And I said, ‘Well, let’s go with the white…’

In the end, everyone wants to get the call right, and the right call was offside. But it can be a little nerve-wracking. Sometimes I wished we didn’t have to make that call. But it worked out.”

The most straightforward fix would involve having the folks in Toronto take a look at every goal to confirm it should count, but that would obviously have the potential to have a fairly undesirable impact on the pace of play.

With that said, it’s pretty clear the NHL should take some time during the offseason to figure out a way to improve a system that can’t get much worse than it currently is.