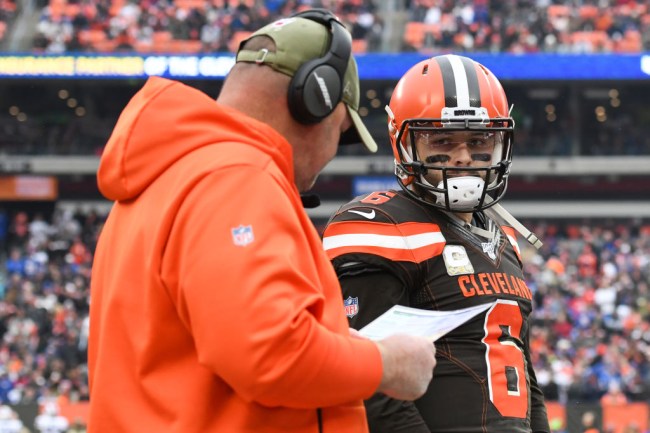 The Cleveland Browns have been mighty disappointing this season. This was supposed to be the Browns year, this was a team that was supposed to be fun to watch as they looked to take over the NFL, but that dream died about six weeks ago.

From players reportedly asking other teams to ‘come get them’ before, after and even during games to Baker Mayfield having a disappointing year, Freddie Kitchens’ squad has looked bad this season far more often than they’ve looked good.

As Cleveland is set for its 12th straight losing season, Kitchens’ job security has been an obvious talking point over the past month-plus.

As a first-year head coach, there’s an argument that the Browns should give him at least another season, but then again this is the NFL and the Browns have been beyond disappointing.

Following his team’s 31-15 loss to the Ravens on Sunday, Mayfield was asked about Kitchens and more specifically what his future may hold.

“That’s not my decision to make, so whatever happens, happens moving forward,” Mayfield told NFL.com. “I know how I’m going to handle it: Getting whatever receiving corps and tight ends we have together in the offseason and making sure we’re on the same page so we hit the ground running in the spring — kind of like I hit on earlier in the week — to where there’s no room to be made up come training camp.”

There’s nothing wrong with this statement from Mayfield, but it is worth noting that he didn’t come out swinging in favor of his current head coach. He could have endorsed him but instead said it’s simply not his decision.

Mayfield and company have essentially thrown this season in the trash and it sounds like he’s already looking forward to next season and trying to get things clicking in Cleveland. Whether he’ll be doing that with Kitchens on the sideline or not is the great unknown.