Multiple Browns, Including Jarvis Landry, Reportedly Yelled ‘Come Get Me’ Toward The Cardinals Sideline During Game 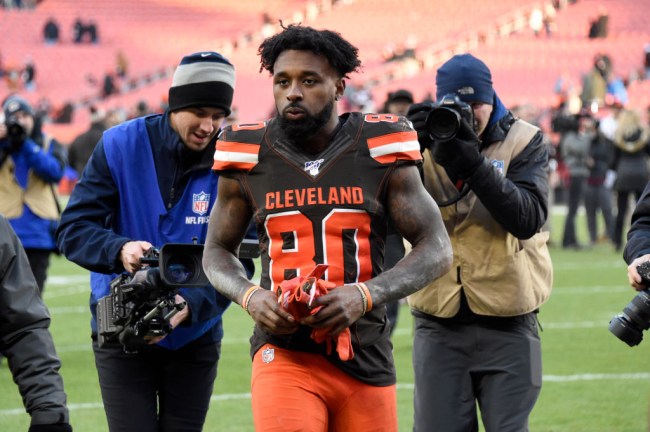 ‘Come get me’ is the phrase of the season among Browns this season, apparently. First, it was Odell Beckham Jr. reportedly yelling the phrase at opposing players and coaches, now a number of Cleveland’s players, including Jarvis Landry, are doing the same.

According to NFL Network’s Michael Silver, and his two sources, Landry and other players yelled the phrase at the Cardinals sideline during the team’s loss on Sunday.

More fallout from the Jarvis Landry tirade during the Browns-Cardinals game: I'm told by two sources that before the game ended, 'multiple' Browns players yelled at the Arizona sideline to 'come get me'–asking to come play for the Cardinals. Landry, I'm told, was one of them.

Every single day there seems to be something new going on with this dysfunctional franchise. The only thing that’s been a constant for this Browns team has been how inconsistent they’ve been all season long.

While this is just a report and nothing direct from the mouth of Landry or any other Browns, as these rumors and reports continue to fly, it’s hard to think they’re all untrue at this point.

Landry also made headlines during the Arizona game after he was caught yelling at head coach Freddie Kitchens during the game.

Landry had just two catches for two yards at halftime before finishing the game with five catches on eight targets for 23 yards and you’ve got one frustrated wide receiver.

With their loss to the Cardinals on Sunday, the Browns now have the longest active streak without a 10-win season in the NFL.