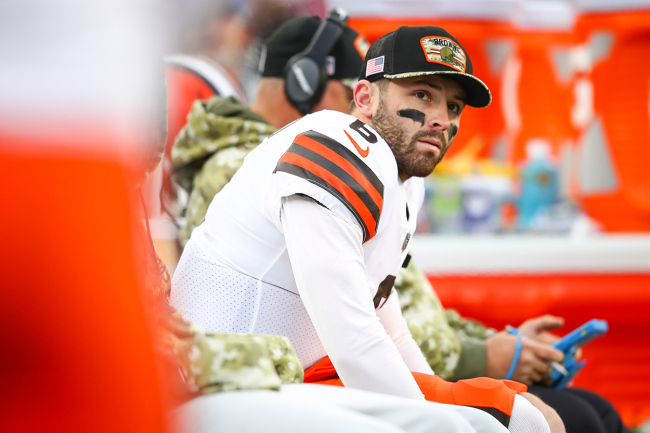 The Baker Mayfield saga finally came to an end on Wednesday afternoon. As a result, one of his fans is in a very awkward spot.

After the Browns traded for Deshaun Watson early in the offseason, the team’s relationship with its former No. 1 overall pick was immediately in shambles. Mayfield asked to be traded and Cleveland said that it would try. From there, a constant media storm began with a lot of back-and-forth between varying and contradicting reports.

In the end, it was the Panthers who landed the former Heisman Trophy winner. Carolina traded a conditional fifth round pick to Cleveland in exchange for Mayfield and put itself in a very interesting position that is only made more awkward by its offensive coordinator’s old evaluation of his new quarterback.

Meanwhile, one Browns fan is in an even more uncomfortable place. Known as ‘Reaper-of-the-North,’ the fan has a massive tattoo of Mayfield.

The tattoo of Mayfield is not from his Oklahoma days. It isn’t a generic, nondescript portrait.

The tattoo of Baker Mayfield depicts him in a Cleveland Browns uniform.

He will have it forever.

There are a few options for the Reaper-of-the-North.

He could stick with the tattoo and forever represent Mayfield’s .500 record in four years with Cleveland. He could have the tattoo removed, but it rather large and it would be a tough process that may not prove to be successful. Or, he could somehow transform the tattoo into a different player.

Looking at the Browns over the past 20 years and convincing yourself to get a permanent tribute to a quarterback is a wild move. But what’s done is done.