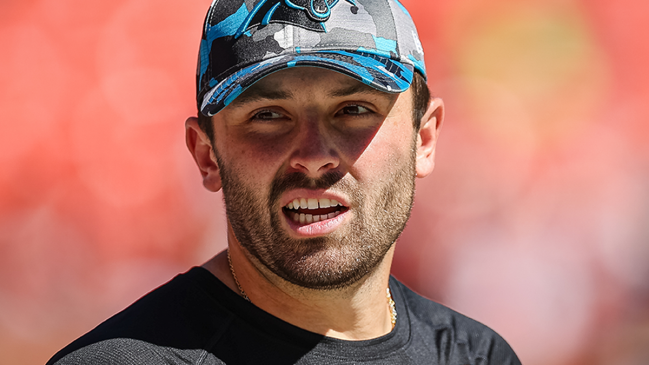 After being released by the Carolina Panthers on Monday (not even six months after they traded for him) and claimed by the Los Angeles Rams the following day on Tuesday, reports indicate that crestfallen quarterback Baker Mayfield could play for L.A. in TONIGHT’S game against the Las Vegas Raiders.

At the very least, according to NFL insiders, Mayfield is expected to be active and suited up for the upcoming Week 14 Thursday Night Football matchup in California.

NFL Network’s Tom Pelissero says that Mayfield is already up to speed on the team’s game plan and his involvement in the game will depend on how John Wolford, the current starting QB in Matthew Stafford’s absence, feels about his neck injury.

Head coach Sean McVay told reporters Wednesday that he was “working through” Mayfield’s status leading into the game after the former No. 1 overall pick arrived in L.A. Tuesday night and attended practice Wednesday.

If Mayfield does complete the astoundingly quick turnaround to take the field in any capacity for the Rams, he will become the fourth QB to take a snap in McVay’s offense this year. [via NFL]

If Mayfield does play tonight, it would, at least, make an otherwise meaningless game between the 5-7 Las Vegas Raiders and the 3-9 Los Angeles Rams a bit more intriguing.

Mayfield was originally drafted by the Cleveland Browns with the #1 overall pick in the 2018 NFL Draft. A former Heisman Trophy winner at the University of Oklahoma, Mayfield lasted just four seasons with the Browns before they shipped him off to Carolina in favor of controversial signal-caller Deshaun Watson, who was facing 26 civil lawsuits alleging sexual misconduct at the time the team acquired him.