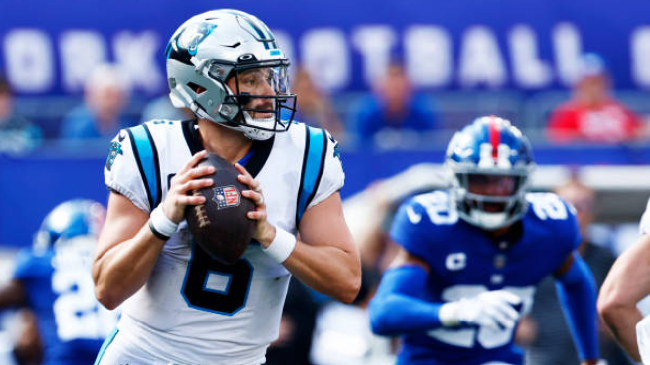 Baker Mayfield’s tenure as starting quarterback of the Carolina Panthers has just missed getting out to a great start.

Then they once again came up just short, this time losing on the road to the Giants by 3 points in a game where they spotted the Giants a 6-point lead with a pair of fumbles on their first two drives.

Today, Baker was asked about the 0-2 start and told reporters that he isn’t hitting the panic button yet.

Each week you need to have a sense of urgency to win. The no-panic mindset comes from the fact that we are just now going into our first division game… Nobody’s hitting the panic button yet. It also helps that we’ve lost by a total of five points.

While the numbers will tell you that teams who start the season 0-2 are much less likely to make the playoffs, the Panthers do still have plenty of time to turn things around for a playoff push.

Things won’t get any easier from here for the Panthers, though. They were expected to win at least one of those first two games and they don’t have many left on their schedule where they will be favored.

They are also heading for a tough stretch in their schedule. This weekend they get the Saints at home coming off of a week where the Saints gave the Bucs a tough fight. The following week they get the Arizona Cardinals and Kyler Murray’s magic. Then they play the San Francisco 49ers, who have one of the league’s best defenses.

Those games are followed by matchups against the Rams and Bucs, who are two of the NFC’s best teams.

It is definitely too early for the Carolina Panthers to be panicking, but Baker Mayfield will definitely need to lead them to better results soon if they want a chance at a playoff spot this season.