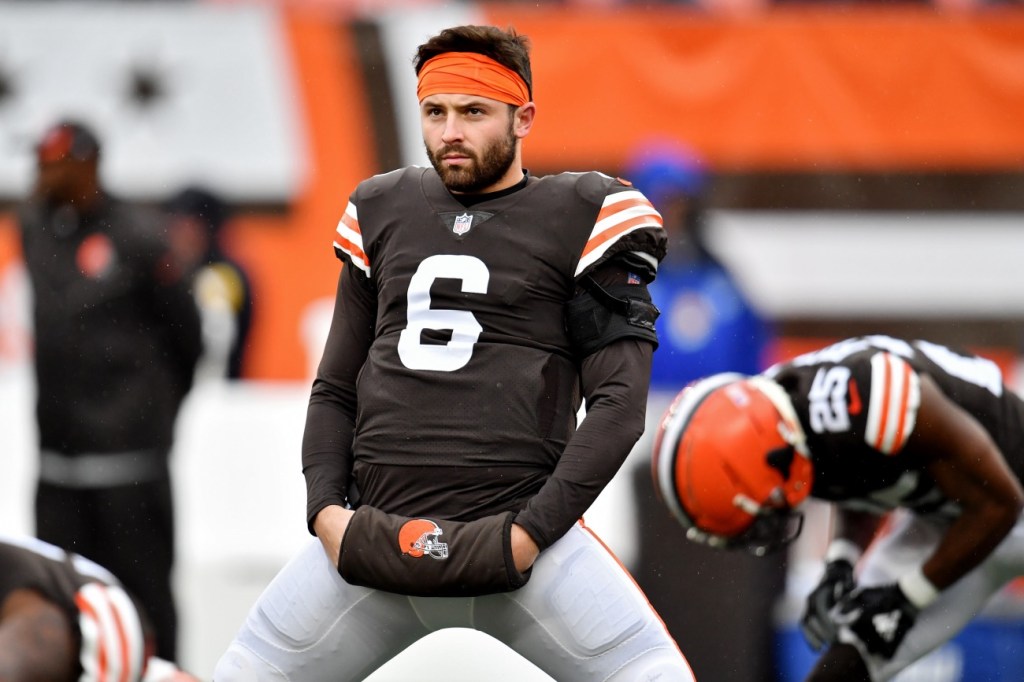 Instead of a blowout, Browns fans witness Baker Mayfield struggle and throw for 176 yards, 1 touchdown, and 2 interceptions (15-for-29 completions). All 13 points scored by the Browns came in the 2nd quarter and the Lions put up 10 points in the second half to make it a close game but the Browns ended up winning 13-10 in a game that wasn’t at all what Cleveland fans expected to see.

Boos from Cleveland Browns fans were raining down on Baker Mayfield and the offense and after the game, Baker was asked about this. He said the boos don’t bother him at all but in the same breath, he threw shade at the fans who boo. Then fans on both sides of the booing discussion took up the argument on Twitter with some hot takes below. This all came a few days after Baker Mayfield’s wife took a shot at his teammates on Instagram.

When Baker was asked about the boos he said they don’t bother him and he just tries to tune them out but then he immediately added this:

Baker, on the fans that booed him in the second half Sunday: "Those are probably the same fans that won't be quiet while we're on offense and trying to operate. So, don't really care." #Browns pic.twitter.com/muKyxFWdFM

.@bakermayfield on booing: "It's probably the same fans who won't be quiet when we are on offense so I don't really care." pic.twitter.com/NNWZKi45CU

Cleveland Browns fans were quick to give their two cents on that quote from Baker Mayfield:

He could have said…."they spend a lot of their hard earned money to sit in a seat. When I don't play well, and when they expect better, they have every right to be upset." This is the beginning of the end for him.

@bakermayfield if you gone play shitty you get boo’d injuries or not if you can’t produce bro sit down ! U so worried about this extension more than you are the season ! If we boo’ing you obviously doing some shitty shit

@bakermayfield Baker, the idiots who boo are the same idiots on their 12th beer, live in their mom’s basement, never played football, has no significant other except their pillow at night & the pillow is pretty disgusted with them every night. Stay strong, stay positive god bless

Sorry everyone I can't handle a little stadium noise, that's why I'm always missing wide open receivers and throwing short of the sticks.

i like the response, fans shouldn’t pick and chose when they root for this team, either all the time or never, don’t cheer and hop back on the wagon when we’re gelling and winning again

Probably shouldn’t have even said anything about it tbh

Glad he waited a day to not say anything that he would regret. I'm sure calling out the fans will do wonders. 🙄

Baker Mayfield is a glorified Mitch Trubisky. Change my mind.

Baker Mayfield has been facing boos from the fans for years. This is from back in 2019:

#Browns QB Baker Mayfield didn’t like the boos from the home crowd. He waved them off and the fans flipped him off. Merry Christmas Cleveland pic.twitter.com/PNqvYNPDbu

The Cleveland Browns rode a 1-31 (win-loss) record before Baker Mayfield arrived and booing the team back then was perfectly reasonable. Booing him now? In a win? It feels like the booing fans aren’t ready to move on from the era when the Browns couldn’t win a game.

I’m not here to lecture anyone about sports but if your team is winning, and they’ve already won more games this season than they did in multiple years combined, then you’re probably someone who enjoys booing and the exact type of fan that Baker Mayfield called out above.