Here’s How Baker Mayfield Can Earn Back The $3.5 Million He Gave Up To Be Traded To The Panthers 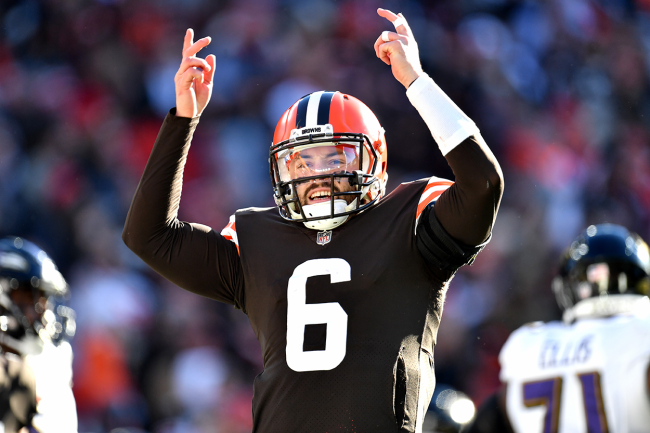 Baker Mayfield wanted out of Cleveland after the Browns acquired Deshaun Watson. He got his wish on July 6, 2022 when he was traded to the Panthers.

Although his future as a starting quarterback is up in the air, Mayfield is still being paid handsomely. He will receive $15.5 million to play this season as either the backup or QB1 in Carolina.

However, he was set to be paid $18.5 million. Mayfield took a minor pay cut so that his trade could go through. $3.5 million, to be exact.

While Mayfield gave up $3.5 million in the deal, he has a chance to get that money back. His new contract with Carolina is structured so that he can earn $3.5 million through various incentives.

First and foremost, Mayfield has to take over the starting job and he must play at least 75 percent of regular season snaps in 2022. In addition, he has to win. The more he wins, the more money he makes.

To win games, typically, a quarterback has to complete at least the majority of his passes. The same goes for Mayfield. If his completion percentage is amongst the upper third of the league, he hits a mark.

And if Mayfield makes the Pro Bowl, he earns an additional bonus incentive. Even if his team doesn’t win a single game.

Here is Mayfield’s full incentives and how much they would pay out:

Baker Mayfield has a chance to earn back the $3.5M in salary he gave up as part of the trade to Carolina through a variety of incentives. They breakdown as follows: pic.twitter.com/EBDuSYKO7h

Mayfield will compete with Sam Darnold for the starting job during training camp. If he has any chance of hitting any of his incentives, it would likely start with winning the job.