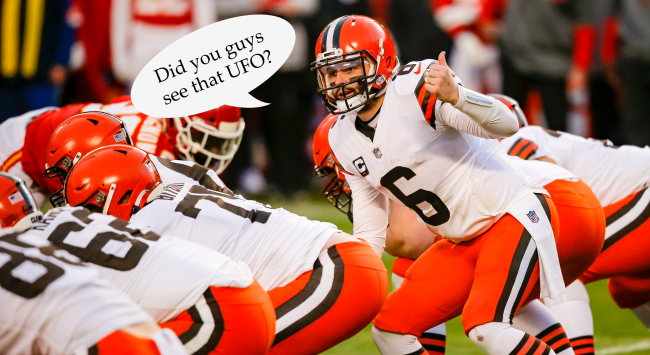 A few weeks ago, Baker Mayfield, Cleveland Browns quarterback and Sasquatch truther, claimed on Twitter that he and his wife Emily experienced a UFO sighting.

“Almost 100%, Em and I just saw a UFO drop straight out of the sky on our way home from dinner… we stopped and looked at each other and asked if either of us saw it… Very bright ball of light going straight down out of the sky towards Lake Travis,” Mayfield tweeted. “Anybody else witness this?”

Emily confirmed Baker’s claim of seeing a UFO with a tweet of her own.

I won’t lie… I’m typically not someone who buys into UFO talk. But all I know is… I saw something tonight that I have never seen. And I’m a little thrown off.

On Monday, Mayfield doubled down on a Zoom call with the media, saying, “It’s real. I saw it. I’m glad the Navy finally confirmed some more pictures. Now everybody doesn’t think I’m as crazy. I believe.”

Then on Thursday, just to drive the point home that “he believes,” Mayfield talked about his UFO sighting with The Ringer’s Kevin Clark.

“Driving home from dinner my wife, night time, the music going, it’s dark outside and just a perfect white gold circle-like ball dropping straight down and going very quickly,” Mayfield explained. “And I’ve seen comments. I’ve seen shooting stars and it wasn’t that. It’s way bigger. There was nothing trailing it. It was just the circle itself coming down, you know? Had to turn the music down, kind of looked at her, like, uh, ‘did you just see that?’ Like, ‘uh yeah’ and we weren’t going out looking for it. We weren’t doing that. It just kind of happened.”

“Some skeptics come out of the woodwork and say, okay, as you alluded to, it could be a shooting star, could be a drone, could be a weather balloon, it was none of those things,” replied Clark.

“No. I truly believe it was a UFO,” Baker responded.

I believe… that he believes.

His story matches up with the one he told on Monday when he revealed, “Just driving back home and had the music going. It was one of those things (Emily) was looking down at her phone in the passenger seat. It was nighttime so when you are looking at your phone screen, everything is dark around you and you can only see that light, but it was bright enough to where it caught her attention, too.

“We kind of just looked at each other, ‘Did you just see that? Yeah.’ Other people in that area confirmed, too.”

We live up in Cedar Park @bakermayfield. My wife and I were out walking our dogs around 8pm last night when we saw something shoot straight down in the sky. She said she saw a shooting star. I said that shooting stars don't go straight down.

I'm still not sure what it was but I definitely saw what you are talking about as I was leaving Northlake Church in Lago Vista Texas last night around 7:45pm.