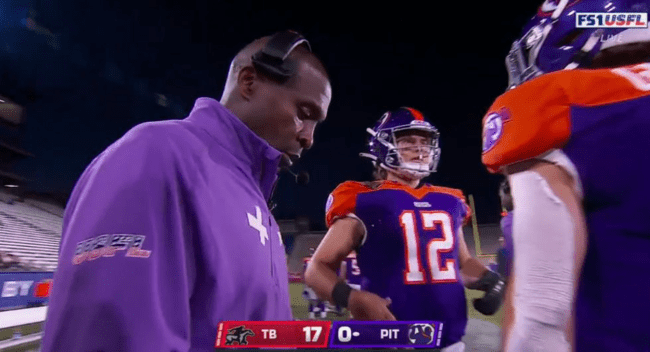 The USFL has only been an active league for a few weeks and there is already an off-field controversy. As the team opened its regular season over the weekend, it aired a pregame show with a behind-the-scenes look at the making of the league.

Think Hard Knocks, but for the USFL.

During one of the segments, the Pittsburgh Maulers organization cut former Michigan, NFL, AAF and CFL running back De’Veon Smith. Head coach Kirby Wilson and a few other team staffers sat him down and explained why.

They said that they had heard of an incident involving Smith and a hotel employee in which he was disrespectful. Smith tried to tell his side of the story, but Wilson was not interested in hearing it and cut him on the spot.

Smith said that the incident was not disrespectful. He claims that he simply saw the hotel employee with pizza and asked if he could have some instead of the chicken salad that he was served.

Smith said that does not like chicken salad and wanted pizza. And then he was cut because of the exchange.

His explanation does the story a lot more justice, but that’s the gist. Smith has since spoken out about the segment after it aired and claims that he did nothing wrong.

The Pittsburgh Maulers are saying that De’Veon Smith had violated team rules and was cut after the disrespectful situation over the pizza and chicken salad. Three strikes and you’re out.

Smith says that is false.

I was never made aware that I violated any team rules, let alone 3 in a 24hr span. I never disrespected anyone. Coach Kirby and I spoke after being released. In that talk, he said that he’d certainly vouch for my character.

No matter who is telling the truth, the entire thing is a bad look for Pittsburgh. Especially if Smith is in the right.

As a result, the Maulers got trolled by their opponents on Monday night. As Pittsburgh was on offense, the Tampa Bay Bandits defense mimicked a pre-snap audible and chirped “chicken salad, chicken salad!” and it was caught on a hot mic.

We really out here using chicken salad as a cadence now LOL#USFL pic.twitter.com/v00HLGjAPi

For better or for worse, Chicken Saladgate is getting the USFL a lot of attention.