At Only 22 Years Old, Barbora Krejcikova Is In Elite Company After First French Open Sweep Since 2000 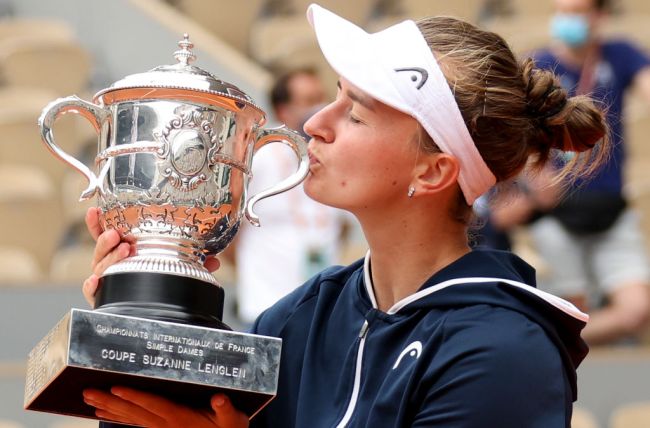 Nobody had a better weekend than Barbora Krejcikova. The 25-year-old from the Czech Republic lifted both the singles and doubles trophies at the French Open, becoming only the seventh woman to do so at Roland Garros.

On the singles side of the tournament, Krejcikova entered unseeded and came out of nowhere. She won her first Grand Slam title in only her fifth singles main draw at any Slam event. It was incredibly impressive. However, the way in which she did it was even more so.

Krejcikova defeated five seeded opponents throughout the bracket and upset 5-seed Elina Svitolina in the Third Round. She also took down 2018 runner-up Sloane Stephens, Coco Gauff and Maria Sakkari.

Krejcikova has long been considered a doubles specialist. She earned her first No. 1 ranking in 2018 at the age of 22 and has continued to be a force. On Sunday morning, Krejcikova and fellow Czech teammate Katerina Siniakova added to her hardware with a 6-4, 6-2 win in the final. They converted five of their seven break points.

The Czechs are CHAMPS 🇨🇿

No.2 seeds @BKrejcikova and @K_Siniakova capture their second Roland-Garros title together, and third major title overall, with a 6-4, 6-2 victory over Mattek-Sands/Swiatek. #RolandGarros pic.twitter.com/dAcvKZ6uEk

Both Krejcikova and Siniakova are 25 years old and have extensive experience playing together. They started their partnership in the juniors at age 17 in 2013. This is the doubles duo’s second win at Roland Garros, having done so in 2018. They claimed the Wimbledon trophy in the same year.

By sweeping the French Open, Krejcikova joined elite company. Not only did she become only the seventh to win both events, but she was the first to do so since 2000. She also became the first player to sweep both titles at any Grand Slam tournament since Serena Williams at Wimbledon in 2016.

In addition, she is now a Grand Slam champion in singles, doubles and mixed doubles. As such, Krejcikova is just the fourth active women’s player to have done so.