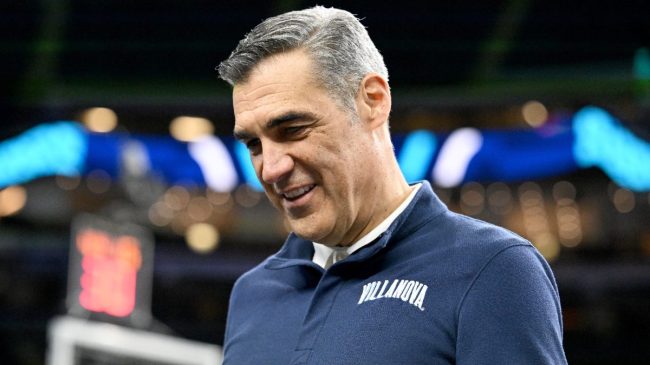 Jay Wright is stepping down as the head coach of the Villanova Bulldogs after 21 seasons, according to a report from college basketball insider Jon Rothstein.

Sources: Jay Wright is expected to step down at Villanova.

The coach has won two national titles with the program, and most recently led the team to a Final Four appearance this past March. Over his tenure, the Bulldogs have won eight conference championships, five Big East tournaments, 34 NCAA tournament games, and 642 overall contests.

He will go down as one of the greatest coaches to roam the sidelines in college basketball.

Fordham’s Kyle Neptune is expected to take his place.

The news shocked many as he seemed to be in the peak of his career. Over the last six seasons, alone, he’d won a pair of national titles and made three Final Four appearances.

Neptune will have huge shoes to fill.

Obviously, this caused a huge reaction on social media.

Many wondered the reasoning behind the abrupt announcement. Others recollected on past memories and highlights of the Hall of Famer’s career.

The question that fans kept asking was, “What’s next?”

Was there a plan to move on to the NBA? There is a vacancy in Los Angeles.

Was he moving on to another college program?

Take a look at some of the initial reaction below.

Jay Wright to the Lakers.

There's been significant NBA interest in Jay Wright through the years, but sources tell ESPN that his intention is to retire from coaching — not only Villanova. Those who've talked to Wright don't believe the NBA holds appeal to him — not now, or in future.

Apparently, the answer is much simpler. He just wants to spend time with family. At 60 years old, he’s decided it’s time to move on to the next phase of his life.

Sources say Jay Wright’s decision to retire after 21 legendary seasons as Villanova head coach is based largely to wanting to spend more time with his family, including his wife Patty and three children. https://t.co/0A1iWPNSTC

When the shock settled a bit, folks were able to recognize not only Wright’s accomplishments, but the greatness we’ve been able to watch over the last few decades of college basketball.

Three of the best to ever do it. All gone within the last year and change.

In the last 13 months Coach K, Roy Williams, and Jay Wright all walked away from the game…

Truly the end of an era in College Basketball pic.twitter.com/ZkiTqKfMAO

Those weren’t the only posts mentioning him and Coach K. Others compared their drastically different approaches to retirement.

Doesn't Jay Wright know you're supposed to go on a tour and get a bunch of gifts then yell at Nova fans in his final home game? Guy doing it all wrong.

In the end though, most comments referenced Wright’s calm demeanor and coolness on the sidelines. Those three-piece suits were awesome.

One Shining Moment but the whole thing is just Jay Wright’s suits pic.twitter.com/oJQp8wW375

Jay Wright should have a $19,000 three-piece suit hanging in the rafters at Villanova's arena, and they should make sure it's freshly pressed before every game. Only way to honor him

I knew it. Jay Wright could only stand this sideline track suit thing for so long.

This is hands down one of my favorite sports moments of all-time and classic Jay Wright. Winning a title has never ever looked this cool. https://t.co/5ChIRCcTZ0

Wright has always been a class act on the sidelines. He will certainly go down as an all-time great.