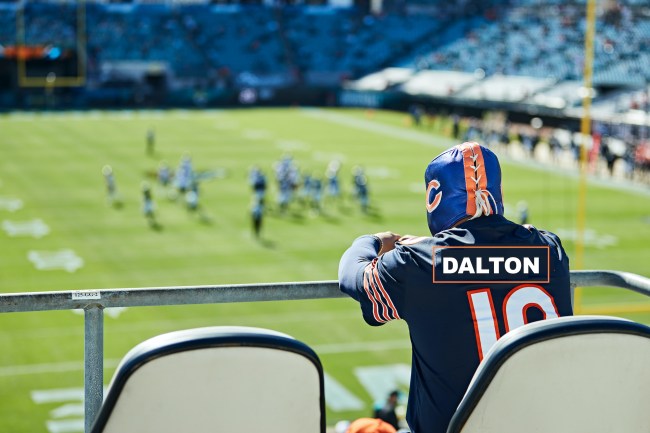 Chicago Bears fans are quite literally renouncing their fandom for the team following reports that former Cincinnati Bengals and Dallas Cowboys quarterback Andy Dalton had signed a 1-year, $10 million deal with the team.

I’m not a bears fan anymore

I'm embrassed to be a #DaBears fan. Signig Andy Dalton is like scoring own goal. I'm not going to watch a single Bears gamę next season Fuck this. #FirePaceNagy

This season I will not be a Bears fan.

with much regret, im officially announcing that im not a fan of the chicago bears due to their complete incompetence towards their loyal fans. this organization can’t do anything right. https://t.co/BfMt8OK5Go

Giving $10 mill to Andy Dalton and not Allen Robinson might be the last straw for me as a Bears fan.

Dalton, now 33-years-old, spent last season as the backup quarterback for the Dallas Cowboys. The former Texas Chrisitan University product filled in admirably for the injured Dak Prescott: playing in 11 games during the 2020 season, the former second-round draft pick threw for 2,169 yards, 14 touchdowns, and eight interceptions, while also completing 64.9 percent of his passes. The team’s record, however, was 4-5 in his nine starts

Prior to his one year with the Cowboys, Dalton spent eight seasons with the Bengals (2011-2019) and compiled a 74-66-2 record as the Bengals starter. While Dalton led the downtrodden franchise five playoff appearances, the team never advanced past the Wildcard Round.

As for the Chicago Bears, it’s not as though they’re coming off a totally despondent season (I’m a Jets fan, so, literally anything is better than what I’ve been dealing with for the last decade), as they finished .500 and made it to the postseason.

If I was a Bears fan, I’d be most annoyed that the team didn’t sign the absolute king Ryan Fitzpatrick, who signed a similar 1-year, $10 million deal with the Washington Redskins earlier this week. Both of these guys — in the absolute best of circumstance — can get you between eight and ten wins, and maybe a playoff berth. Certainly no more than that. It’s when they suck, which is usually about half of the season, that’s key. Take it from a Jets fan — Fitzmagic remains absolutely electric when he’s stinking the place out. The dude will happily throw five picks in a single game as he desperately tries to gun-sling his team back into it. If I’m going to root for a losing team, I want to at least enjoy myself while doing it — that’s what Fitzy is all about, baby.

They're the same, but also very different. pic.twitter.com/DOmW8ie8Xn