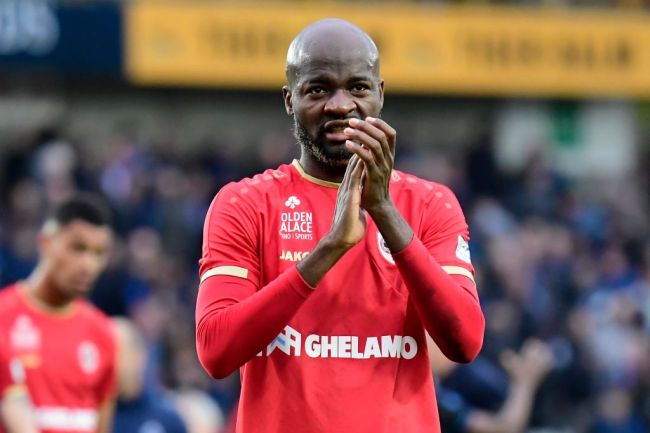 Cameroonian striker Didier Lamekel Ze wants out of the Belgian First Division club Royal Antwerp. The 24-year-old has made his desire for a transfer to the Greek Super League club Panathinaikos to play under his former Antwerp Laszlo Boloni very clear and was recently quoted as saying that “it’s simple: I want to go to Greece.” However, as his current club refuses to make the move, he has had to take matters into his own hands to communicate his wishes.

Lemekel Ze showed up for training at the Antwerp facility sporting the jersey of the club’s rival Anderlecht earlier this week. The two cities are located less than an hour apart and the shirt bore the name of former Crystal Palace winger Yannick Bolasie. He was denied entry upon arrival and quarreled with security as he tried to force his way through.

Sitting here this morning admiring the pettiness of Royal Antwerp forward Didier Lamkel Zé showing up to training in a rival Anderlecht shirt as he tries to force a move to Panathinaikos.

Of course they didn't let him in. pic.twitter.com/cp2mnHzIs8

After being turned away at the door on Monday, he threatened to show up wearing a Beerschot shirt on Tuesday, another Antwerp rival. Lemekel Ze has spent two years with his current team and contributed 11 goals and nine assists in that period. However, his recent antics have not been well-received by the fans and police have intervened to guarantee his safety.

“We are not bodyguards, but we take the situation seriously,” an Antwerp police spokesperson said. “We can’t say anything at this moment, but it is true that we have detected threats against him have the events of the last few days. Therefore, we are closely following the situation.”

Lemekel Ze has since issued an apology through the club’s official Twitter page.

“If I reacted like that, it is because my head was elsewhere with the transfer, it wasn’t easy for me,” Lemekel Ze said. “I’m so sorry for my actions. I won’t forget how my teammates and the technical staff have supported me in the dressing room since my arrival here. I’m ready for the club if the new coach needs me. I hope to be in front of the supporters very soon on the pitch.”

The sentiment behind his words seem to be focused around correcting his image and getting back on the pitch, rather than truly showing remorse, but he was back out with his team for a scrimmage at training on Wednesday. Antwerp’s next match comes Sunday morning and it doesn’t appear that Lemekel Ze will be on his way to Greece before then.