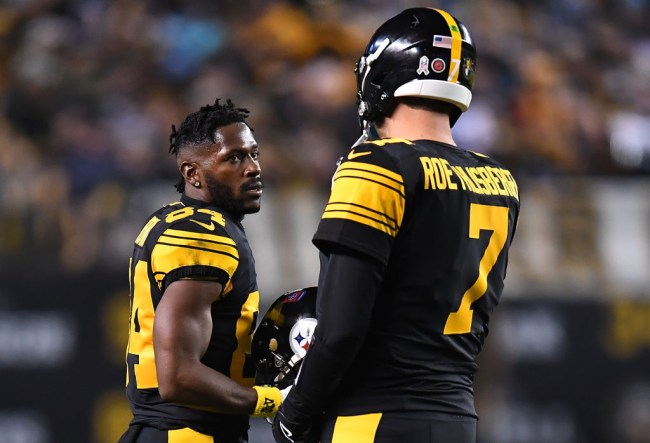 The Cleveland Browns might have held the title of Most Dysfunctional Team In The NFL for a few years but they vacated the claim to the throne last year thanks to the Pittsburgh Steelers, who fell victim to an impressive amount of drama and infighting over the course of the season.

The Steelers came into the season dealing with a major thorn in their side in the form of Le’Veon Bell and the disgruntled running back continually toyed with the team concerning whether or not he’d return from his holdout before ultimately deciding to sit out the entire campaign.

It didn’t take long after that saga ended before a new one began thanks to Antonio Brown, who unexpectedly went AWOL after allegedly getting into a heated argument with Ben Roethlisberger shortly before demanding a trade.

Brown—who apparently had (or has) a reputation for being a diva—was eventually shipped off to Oakland in a laughably lopsided trade after the wide receiver successfully avoided being exiled to Buffalo.

It took a while, but on Monday, Roethlisberger broke his silence and finally addressed the drama by saying he regretted his role in the situation before apologizing for some of the critical comments he made.

Ben Roethlisberger's first comments to @KDPomp and @KDKA on Antonio Brown: "I took some heat and deservedly so for some of the comments on that show and especially towards him. I genuinely feel bad about that and I'm sorry. Did I got to far after that Denver game? Probably…"

However, based on a not-so-cryptic tweet Brown sent out after his former quarterback extended an olive branch, the two still aren’t on the best of terms.

On Tuesday, things took a fairly interesting turn when Roethlisberger reflected on the situation a bit more while talking with the media and claimed he has no idea why things went south so suddenly.

Roethlisberger said he was under the impression that the last conversation he had with Brown ended on good terms and claims he was blindsided when he was informed his teammate had beef with him (he also said Brown never answered any of the calls or texts he sent his way).

The QB seems to be painting himself as a saint in this situation, and while I admit he sounded pretty genuine in that clip, I have a feeling we’re not hearing the full story here.

Now, if you’ll excuse me, I’m off to go make some popcorn and frantically refresh Brown’s Twitter until he inevitably responds.