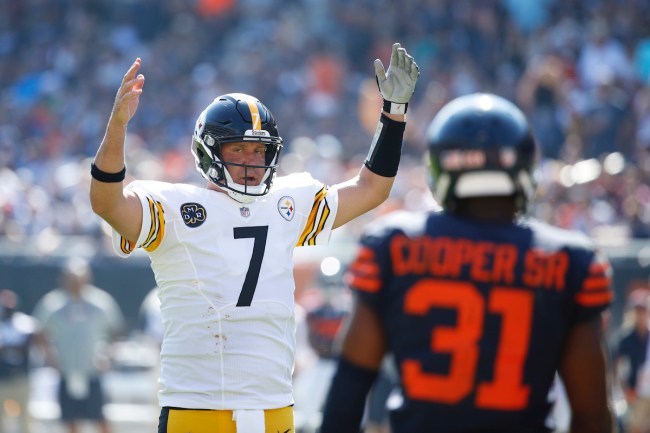 Yes, Ben Roethlisberger has won two Super Bowls, has made six Pro Bowls and even led the NFL in passing yards just two seasons ago, but eyes don’t lie, and this 39-year-old version of Big Ben is not the version of years past. We all saw that during the 2020 NFL season, when Roethlisberger struggled down the stretch for the Pittsburgh Steelers after an impressive 11-0 start. The quarterback looked old. He looked weathered. He looked hurt.

While the Steelers did the right thing this NFL offseason by bringing back the franchise icon on a restructured contract, there were some tense times leading up to the deal getting done. Remember, at one point an executive in the organization actually said Ben Roethlisberger should either “retire or restructure,” which was a blatant threat to the quarterback that he seemed to have limited options.

But a new report suggests that the future Hall of Famer actually may have had a few more possibilities had he decided not to re-sign with the Steelers. That’s because, per CBS Sports’ Jason La Canfora, the Chicago Bears — who are desperate to find a quarterback this NFL offseason — even kicked around the tires on signing Roethlisberger.

Chicago needs a major upgrade, and the options are limited. League sources said the Bears were in fact pretty serious about Carson Wentz, and had internal discussions about Big Ben as well and were primed to be perhaps the only landing spot for him had he not agreed to take a significant pay cut to stay in Pittsburgh.

There’s desperation, and then there’s absolute distress — which the Chicago Bears seem to be in right now as they search for a starting quarterback. It’s one thing to move on from the flop known as Mitch Trubisky, a former No. 2 overall pick who never quite got hold of the starting role. It’s another thing to explore any signal-caller under the sun in hopes of finding a competent option. As La Canfora mentioned, not only did Chicago reportedly consider Ben Roethlisberger, but they also seriously looked at trading for Carson Wentz earlier this NFL offseason.

It’s clear that the franchise has no plan right now, and is reportedly doing whatever it can to lure perennial MVP candidate Russell Wilson away from the Seattle Seahawks. That would be a home run of an acquisition, but it seems like a long shot. It’s like trying to win the Powerball jackpot to pay back debt to mobsters.

Now that Roethlisberger’s back with the Steelers, the Bears are left scrambling as they look for other alternatives. It’s a crucial offseason for the team, and the quarterback issue is the No. 1 priority before (presumably) going into full rebuild mode in 2022.