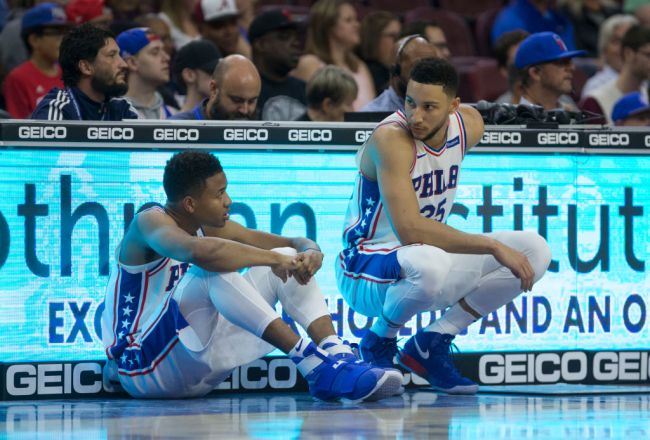 It’s 90 degrees in Philadelphia today, and Philadelphia 76ers point guard Ben Simmons is feeling all of the heat.

Consequently, Markelle Fultz quickly became a trending topic on Twitter. As fans love to do, people considered how the team might have faired with Fultz playing point guard.

Markelle Fultz woulda had at least 10

Markelle Fultz would never have gone out sad like this pic.twitter.com/Dfa9WOklhr

For reference, the organization selected both players with the No. 1 overall draft pick— Simmons in 2016 and Fultz in 2017. The two played together until 2019 when the 76ers traded Fultz to the Magic in the middle of the season. However, even then, 76er fans believed that Simmons was the problem and should have been traded.

Today, the Orlando Magic added their own spark to the anti-Simmons fire. The team shaded him in a tweet reading, “Markelle Fultz.” with a GIF of Fultz.

Ok Orlando we see you pic.twitter.com/8PmE7wnT98

Thank you @sixers for gifting us Fultz! https://t.co/uCj3CxaBuh

Statistically, Simmons is the better player. He averaged 14.3 points, 6.9 assists and 7.2 rebounds. To compare, Fultz averaged 12.9 points, 5.4 assists and 3.1 rebounds in his eight games this season before suffering a torn ACL.

Still, Fultz continues to impress in his young career and develop as a player. On the other hand, Simmons is not showing Philly fans much improvement at all. In fact, Simmons, averaged his lowest totals across the three major categories this season. And that’s in addition to three turnovers and three fouls a game.