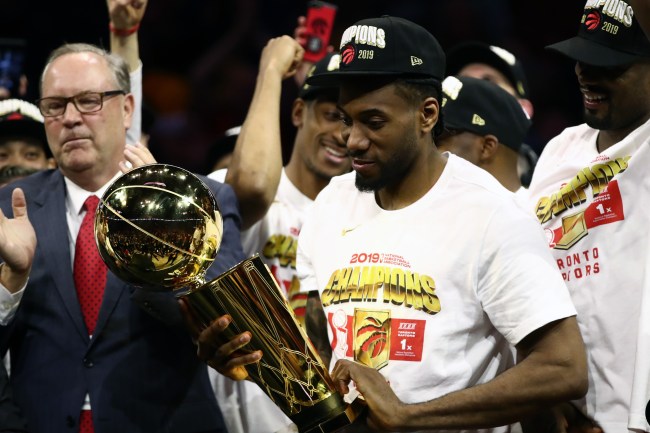 The people of Toronto treat sporting events and celebrations like my mom treats getting to the airport. Last night at dinner time, over 100 people were already waiting in line for a front-row seat at the Raptors parade, which began at 11 am the following day. This is true to form for Raptors fans, who waited nine hours before tipoff to get into Jurassic Park before Game 5. On a work day no less.

The parade is well under way at the time of this writing, as an estimated two million people filled the streets to celebrate the first NBA championship in the franchise’s 25-year history. For perspective, the entire population of Toronto is just under 3 million.

How the @Raptors parade looks from the air 👀✈️#WeTheNorthDay pic.twitter.com/LU2aInKgOp

THE WHOLE CITY OF TORONTO OUT HERE 🤯🤯#WeTheNorthDay | @Raptors pic.twitter.com/UK3Oe1VbNM

The Kawhi doppelgänger has stolen the show at the parade, signing autographs and taking pictures with a guy who looks only vaguely like the Finals MVP. But, the people of Toronto have demonstrated their creative muscle with some of the signs created for the celebration. Check out some of the best below.

We are the champions! Proud to assist with @raptors Fan Signs. Signs like these are something we take great pride in making! #NBAChamps #WeAreTheChampions #Raptors #WeTheNorth pic.twitter.com/qIa60q0Idn

getting all the good signs early pic.twitter.com/GOmFzv2RTI

There is a @Raptors fan walking around Nathan Phillips Square with chips and dip – an homage to @Drake’s post championship comments.

I can’t imagine how many gallons of maple syrup are being chugged on the streets of Toronto right now.