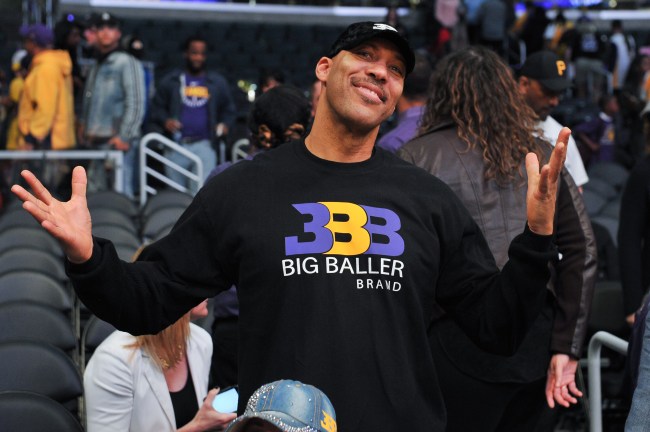 Big Baller Brand has been a mess over the past week or so, with Lonzo Ball accusing one of the co-founders, Alan Foster, of stealing $1.5 million from him. That led to Lonzo not only deleting all association with the brand on his social media and leaving them for, presumably, Nike, but also covering up his Big Baller Brand tattoo already. Yeah, it’s been a ratchet week for Lavar Ball and his do-it-yourself athletic company.

While Big Baller Brand is all but dead at this point considering the family who started it, the Ball family, is split on wanting to do anything with it, one thing going for BBB is the fact that Lavar Ball’s high school All-American Game is still happening. Remember, after Lavar’s youngest son, LaMelo, was rules ineligible for the bigger All-American games with Jordan and McDonald’s, he went out and just created his own.

According to FTW.USAToday, a source said that, even with all the turmoil surrounding Big Baller Brand right now, the exhibition game isn’t going to be cancelled.

According to event publicist Alexis Robinson of Diamond Marketing and Public Relations, the game will go on as scheduled with every player — including LaMelo — committed to participated.

“All the players are confirmed,” Robinson told For The Win. “Their flights are out. The family is here. LaMelo is supposed to tweet something out within the next couple days because — they just don’t want to tweet anything off of (the Big Baller Brand account) until they figure all this legal stuff out with Alan (Foster) obviously having partial ownership.

“Everything is still intact. Everything is confirmed. LaVar is actually going on local radio here three times tomorrow to talk about it. It’s all happening.”

As initially planned, the Big Baller Brand All-American Game is still scheduled to be played in the Orleans Arena in Las Vegas, and, per the FTW.USAToday piece, tickets for the contest ranged from about $22 to $92. And, while LaMelo Ball was the headliner, the entire rosters were announced, too.

Congrats to the 🅱️🅱️🅱️ All American class of 2019. The inaugural game will take place March 31st – 3:00pm at The Orleans Arena in Las Vegas.

There will be a BBB Pop Up Shop inside the arena with exclusive merch! https://t.co/i8PZrOxYT4https://t.co/8DKJNhlDYA for more info pic.twitter.com/y4HMmDzbq0

Unfortunately, even with the Big Baller Brand game still happening, Ramona Shelburne of ESPN reported that the long-term plans for the company are very much up in the air, with the family even discussing over the past weekend about simply closing up shop at one point following the Alan Foster news.

The Ball Family had discussions over the weekend about folding @bigballerbrand and anything associated with Alan Foster. Story coming shortly on ESPN.

As much as we’re all making the obvious jokes about Big Baller Brand failing — which seemed to be doomed from the beginning — it’s pretty sad to see the entire Ball family be torn apart. That might be my nice guy coming out, so, hopefully, things between Lonzo, his family and everyone associated with the brand can make up at some point.