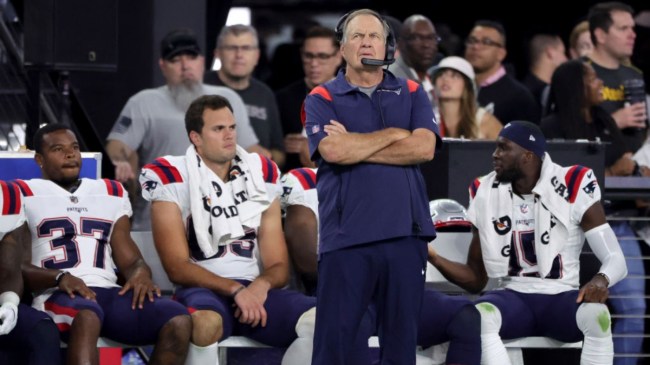 Throughout the NFL preseason, the New England Patriots have been the subjects of one of the league’s strangest stories. After Josh McDaniels left the Pats to become the head coach of the Las Vegas Raiders, the Patriots didn’t bring anybody in to replace him as the team’s offensive coordinator.

They headed into the preseason with nobody named as their offensive coordinator and it didn’t even become clear until recently who exactly was calling plays for the offense.

While the Patriots ended up giving Matt Patricia play-calling duties, they still haven’t given anybody the title of OC and now it seems that they may have had a very good reason why.

The team’s two options for offensive coordinator were both recently fired. Patricia was fired by the Lions after the 2020 season and the Giants fired Joe Judge after 2021. Those teams are still required to pay the remaining money on their contracts.

The Ringer’s Rodger Sherman pointed out that this could be factoring in to the Patriots’ decision.

Hey, you know what's weird and probably bad?
That the Patriots apparently gave control of their offense to Matt Patricia and Joe Judge, who have basically never coached offense, and were *extremely* bad at it when they did! https://t.co/9fmtyRgS7I

There could be a financial element here, too; by withholding a coordinator title, the Patriots could be ensuring the Lions pay Patricia the remaining money owed on his contract while also getting out of having to fit within a pay scale for a position coach. So Patricia is calling plays as New England’s “senior football advisor/offensive line,” and the Ford family keeps sending him paychecks.

While there is no reasoning that will make trusting Patricia and Judge with your offense make any more sense, that is at least a pretty smart reason not to name an offensive coordinator.

Maybe Bill Belichick and the Patriots really are still as clever as they ever were.