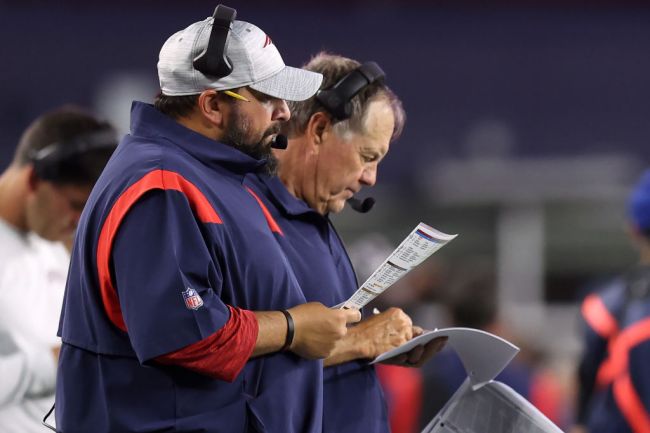 This summer has been an odd one for the New England Patriots offense.

After their former offensive coordinator, Josh McDaniels, left to become the head coach of the Las Vegas Raiders, the Patriots opted not to fill his vacant position. Instead, they decided they would have Joe Judge and Matt Patricia share offensive coordinator duties without either having the title.

Those two men also don’t have any experience in that role and only Patricia has any as an offensive coach, serving as an offensive assistant for the Patriots almost 20 years ago.

While the football world had known that Judge and Patricia would be sharing duties, it had been unclear who would be calling plays for the team, with Bill Belichick doing it himself also seeming to be a possibility.

That changed today as Patriots insider Tom Curran revealed on The Pat McAfee show that Matt Patricia would be the one calling plays for the offense.

"Matt Patricia is calling the offense right now.. there is never anything that isn't fascinating about this team" ~@tomecurran#PMSLive #ForeverNE pic.twitter.com/UlAfDrXTar

While the Patriots may have some clarity on their play calling, their current offensive situation has not seemed to be working for them. There have repeatedly been negative reports coming out of camp about Mac Jones and the offense, despite Jones’ promising rookie season last year.

Yesterday, there were reports coming out of camp that Jones had his worst practice yet as he struggled in multiple drills and threw an interception during the 2-minute drill.

If these struggles carry over into the season, the Patriots will surely be subject to plenty of criticism over their decision not to employ an offensive coordinator.