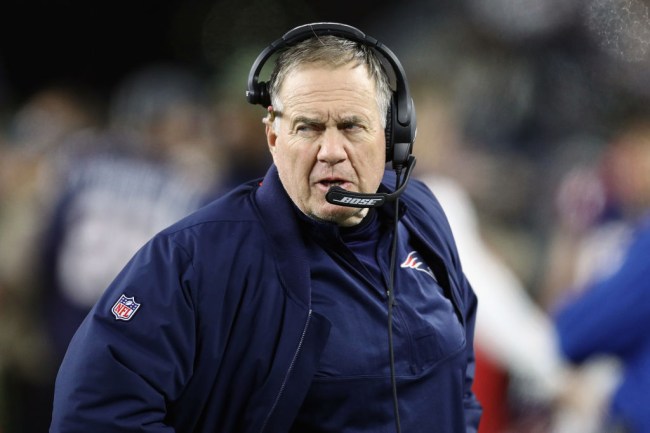 Seeing Bill Belichick animated is rarer than a redhead who loves the beach. For one of the best coaches in the history of professional  sports, stoicism is the name of the game. But, there are the rare occasions when the 66-year-old Patriots coach purges all the emotions that have collected inside his robotic exoskeleton over many months. And luckily for us, we have video footage of this atypical sight.

During Sunday night’s 31-17 win over the Packers, Belichick demonstrated his inner Pete Carroll to laud his defense over containing Aaron Rodgers. Check out the clip below, via Inside the NFL.

“That pass rush is what we want,” Belichick said during the rah-rah session. “Keep working the shit out of those guards. Keep him in the pocket. He’s tried to throw us two interceptions, now. We’re gonna get one. He’s just lobbing it up there.

“That’s a great job. Keep pressing him. If he runs backward, then run him out of bounds, that’s great.”

The Patriots never got the interception that Belichick was hoping for, but they but did contain one of the game’s best to 269 yards and two touchdowns with a ‘meh’ 55.8 percent completion rate. That would be a career night for Nathan Petermann, but for Aaron Rodgers, it’s a forgettable performance.

While it seems like Belichick was underestimating Rodgers in his pep talk to his defense, the Patriot coach has the utmost respect for Rodgers’ abilities, he said as much in a press conference leading up to Sunday’s game.

“He has great accuracy,” Belichick said of Rodgers. “Very mobile in the pocket. He extends plays. Really good vision down the field. Uses the cadence well. He’s a very good situational player. He’s just one of the great quarterbacks in the National Football League. No question about it.”

Imagine what Belichick says when he’s mic’ed up against Ryan Tannehill.