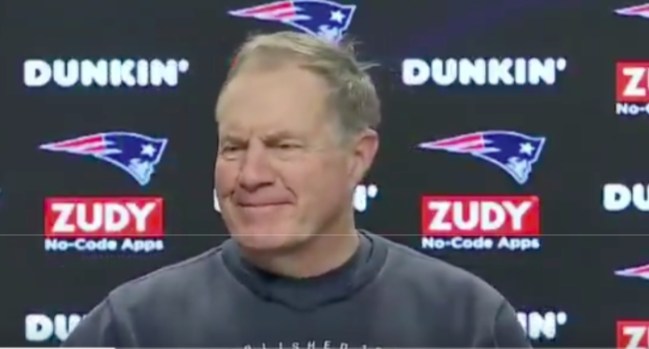 From July to February every year, you can bet your bottom dollar Bill Belichick will be locked away in a small room in Gillette Stadium ignoring calls from his lovely girlfriend Linda Holliday in favor of trying to devise a plan to break the will of his upcoming opponent.

That relentlessness doesn’t take time off, not even around the most joyous time of year.

The New England Patriots coach asked the media if it was done with it’s shopping before catching himself being a human and sliding directly back into football robot mode.

Bill Belichick on his Christmas shopping:

“I’m behind. Christmas comes at an inconvenient time, right in the middle of the football season.” pic.twitter.com/q6jKIjsWed

Lets not forget, back in 2016, Belichick was coerced into admitting that he enjoyed Christmas caroling.

Can you imagine ringing Belichick’s doorbell Saturday night before a big game to sing him a song? I wouldn’t wish that on my worst enemy.

Belichick’s exception to the rule was back in 2009 when Randy Moss invited Belichick to the team Halloween party.

And the dude showed up!