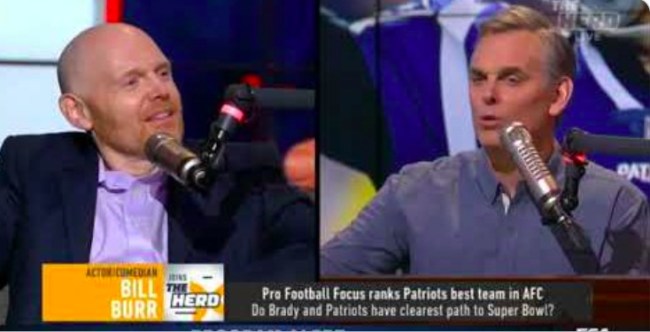 Colin Cowherd hasn’t punched his ticket aboard the Baker Mayfield train. The host of FS1’s The Herd has taken issue publicly with the Browns quarterback’s “call it how he sees it” approach with the media, and even as Mayfield has proved himself to be a more than capable NFL quarterback, the perpetually stubborn Cowherd is willing to die on the Baker hate hill.

Here was Cowherd’s take on Baker giving former coach Hue Jackson the cold shoulder and calling him “fake” for joining the Bengals soon after getting fired by the Browns:

“Baker Mayfield had three good games against atrocious defenses, he was in the news for three weeks. He got clobbered this weekend against Houston and he goes and hides. That’s an inconsistent personality. That’s my problem.”

Cowherd’s gripe with Mayfield has become so relentless, it is now meme-worthy.

Colin Cowherd realizing @bakermayfield is going to be a NFL QB for years to come. pic.twitter.com/i7hvZXm8FL

Baker Mayfield celebrating with his close friends and family after handing Colin Cowherd another L like pic.twitter.com/6OM01iTxqz

The state of Ohio is collectively applauding comedian Bill Burr after appearing on The Herd and calling Colin out on his Baker bullshit. It is glorious.

Bill Burr, you ever come to Norman, OK and consider your meals and drinks paid for. This is awesome. 🤣 pic.twitter.com/5Lvi7gZOL3

Here’s the meat and potatoes of the exchange, transcribed by For The Win:

Burr: Once you get your opinion, you’re like crazy with it. You just won’t back down. You had a pro athlete sitting here.

Burr: And you’re Gym class Jerry over here, arguing with the guy like you got drafted too. It was ridiculous. And by the way, how great is it to see excited Cleveland Browns fans?

Burr: It is great. Well, stop being The Grinch! Just give it up and say the guy’s doing the job.

Cowherd: You want me to be a soft — one of those Twitter tough guys? When a guy comes here and sits on the couch, I go right after him. You respect me for that?

Burr: No, I don’t. You and your big, dumb desk, hiding behind your microphone.

It looks like Bill’s verbal spanking caused Colin to see the light.

Baker Mayfield throws a better, more consistently accurate football, than Cam Newton. And it’s not close. NOT EVEN CLOSE.