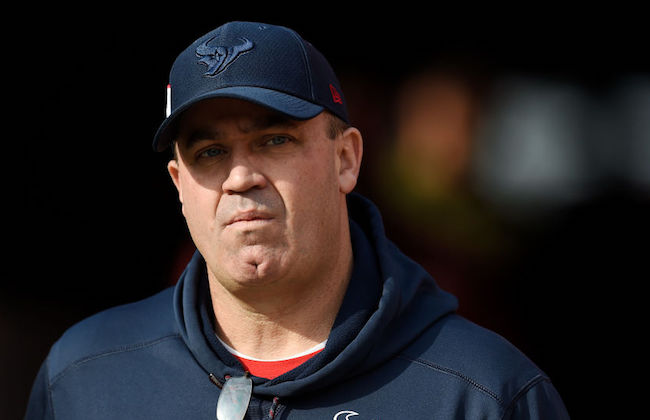 There are certainly exceptions to this rule, and while I don’t want to generalize an entire profession, it seems like a lot of football coaches—especially the most successful ones—have a psychotic tinge to them that can be manifested in a number of ways.

Some of these tendencies can be extremely harmful, such as the all-too-many cases where high school coaches helped teenagers “build character” by denying them water that could have saved them from dying from heat stroke.

On the other side of the coin, you have guys whose borderline craziness is highlighted by innocuous idiosyncracies; Jim Harbaugh seems fairly normal but anyone who consumes as much milk and wears as many khakis as he does has to be slightly off.

This brings us to Bill O’Brien, a man who has a long and storied history of wearing his emotions on his sleeve. The coach got his first job in the NFL when he joined the Patriots in 2007 and was eventually tapped to step into the role of offensive coordinator by Bill Belichick, a man who decidedly does not let any frustrations he may be dealing with show.

After a fairly brief stint at Penn State, he returned to the NFL to lead the Houston Texans and the world got a taste of his lack of anger management when the team was the focus of Hard Knocks, which led him to set up a swear jar for charity.

The following year, Larry Izzo found himself facing O’Brien’s wrath after a special teams mistake made him lose his temper.

O’Brien continued his proud tradition of showcasing his impressive lack of restraint during Houston’s December matchup with the Broncos, where he saw his team trailing 31-3 at halftime.

As the Texans walked into the tunnel, a fan accurately described the state of things when he informed them that they suck, which apparently didn’t sit too well with O’Brien, who was held back by DeAndre Hopkins while launching a barrage of expletives in the heckler’s direction.

The Texans lost that game but still managed to clinch a playoff spot and O’Brien will have a chance to prove he does not, in fact, suck when they take on the Chiefs on Sunday.