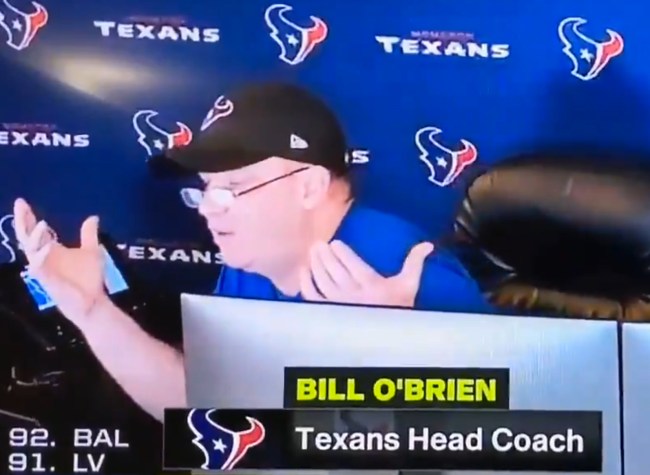 ESPN’s coverage of the NFL Draft this year includes surveillance camera footage of coaches, GMs, and athletes eagerly awaiting the next pick.

Most of the footage has been boring – not including GMs wearing face masks in their own home and whatever the hell was going on at Mike Vrabel’s house – but every once in awhile ESPN will strike gold.

Case in point – this footage of Houston Texans’ coach Bill O’Brien getting super pissed off with someone on the phone.

Who the hell was Bill so mad at on the other end of the line?

Did an Instacart delivery get pushed back?

Can the GrubHub guy not find his compound to deliver dim sum?

According to ProFootballTalk, the Texans’ head coach/GM/equipment manager was pissed at the Detroit Lions. The Lions allegedly pulled out of a last-minute trade.

At one point during Friday night’s broadcast of the third round of the 2020 draft, cameras captured an angry reaction from Texans coach Bill O’Brien, who stormed away from his at-home setup.

His anger was directed at Detroit.

According to John McClain of the Houston Chronicle, the Texans and Lions had a deal for the 90th pick in the draft.

At the last second, the Lions allegedly backed out of the trade, and the Texans selected linebacker Jonathan Greenard in that spot.

Texans had a deal with Detroit for the 90th pick but Lions backed out at last instant and Bill O’Brien was furious. You could tell by his reaction on TV. They selected OLB Jonathan Greenard with their pick.

The Lions, on the other hand, have no idea what the hell Bill is so pissed about – there was never a deal on the table.

Lions GM on the incident:

The Houston Chronicle later reported O’Brien was upset because Detroit backed out of a deal “at the last instant” to acquire the 90th overall pick from the Texans.

But Quinn says that’s not true.

“Listen, we talk to a lot of teams,” the general manager said during a video call with reporters after the third round. “When we’re not on the clock, we talk to a bunch of teams, and it’s not just myself. We’ve got four or five people that make calls, so I’m not sure what that was about. But we didn’t have a trade.”

O’Brien is pissed. The Lions have no idea why. The NFL Draft is fun.

O’Brien claims he was just “messing around” on Zoom with other Texans’ personnel.

Maybe O’Brien just found out about the DeAndre Hopkins trade?

Chris Illuminati is a 5-time published author and recovering a**hole who writes about success, fitness, sports, parenting, and professional wrestling. Reach out to him on Instagram & Twitter.