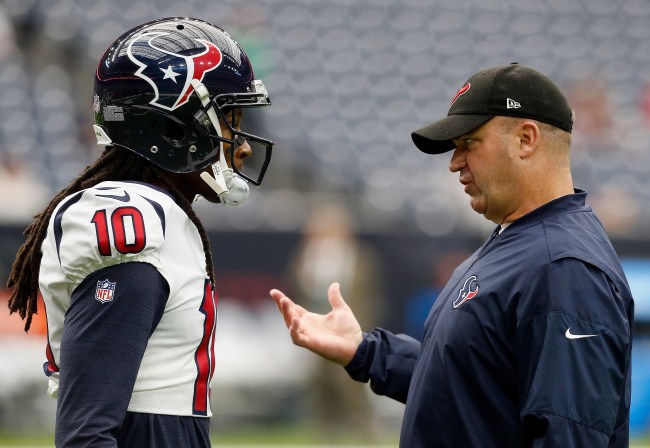 Don’t let a global crisis distract you from the fact that Bill O’Brien traded away one of the most electric players in the league for a sack of marbles, a few baseball cards, and a dead bird.

O’Brien received heat from everyone outside of the entire state of Arizona over the baffling decision to trade DeAndre Hopkins to the Cardinals for a few David Johnson injuries and a second and fourth-round pick. Some dubbed it, “the worst trade of all-time.” The trade was so bad that even Madden ’20 instantly rejected it.

A full month after the trade was announced, Bill O’Brien is still catching heat for it.

In a recent conference call, the Texans coach and general manager pleaded with fans to let the trade play out before dubbing him Satan.

“The best thing I can tell the fans is to please — I know the media’s job is to evaluate right away and I get that — but I think we have to let it all play out. Let it play out. Let the whole thing play out, whether it’s that trade or anything else we’ve done. I would say let’s review a year from now, two years from, three years from now. Let it all play out.”

“Anytime you make a trade, each trade is unique unto itself,” O’Brien said. “So when you’re trading a player like DeAndre Hopkins, who has three years left on his deal and you’re trying to find a trade partner, you’re not talking to 31 other teams. So you’re finding a trade partner No. 1 that’s going to be able to pay DeAndre Hopkins. So that was a big part of it.

“Once we found that team that could afford DeAndre Hopkins in the future, now we then begin to negotiate with what the value of the trade was. So we feel very, very good about being able to get the 40th pick, being able to get David Johnson.”

Stephen A. did not listen to O’Brien’s cries to hold back his hate.

David Johnson is the most important person in Bill O’Brien’s life for the forseeable future.