Bill Self Is All About Kansas Being Named 2020 National Champions: ‘Nobody Had A Better Season Than We Did’ 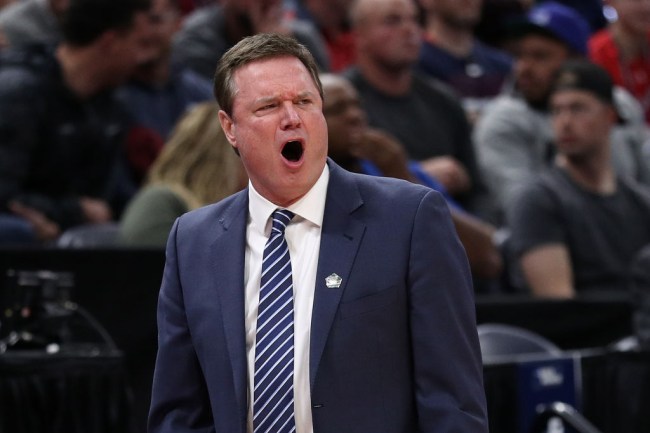 We are living in the year 2020, so even though the entire sports world is forced to hit pause for a moment teams are still going to be on the lookout for a trophy. Just ask Florida senator Joe Gruters who, after the NCAA Tournament was canceled, introduced a resolution in the Florida Senate to name Florida State 2020 National Champions.

The ‘Noles were ranked fifth in the last coaches poll, so I’m not real sure what the hell Gruters is trying to accomplish there other than being mocked by the entire country, but hey, we’re talking about something involving the state of Florida where all the crazy things happen.

Kansas, on the other hand, held the No. 1 spot in the last coaches poll so they do have a bit of a case to be named national champs if the NCAA decides to use the final polls to identify a 2020 national champion. This isn’t a foreign concept by any means, college football named national champions based on the polls for many years before the BCS was introduced, but this year is a particularly unique situation.

Kansas head coach Bill Self discussed the idea of this happening and although he acknowledged that it would be a unique situation he also explained that he’d be – wait for it – in favor of it.

“I would think, from our standpoint, that would be great,” Self said on a Monday teleconference according to ESPN. “But even if that occurred, and I don’t think it would, there’d be a huge asterisk on our side and I’d be the first one to admit it. This would be the year I’d be all in favor because there’s a great chance we’d be No. 1 in the country in most everything when all the rankings are turned in.”

This season ended up being unique for every team around the nation given the current circumstance, but you’d be tough to find a team that had a more drama-filled season than Kansas. Not only did the Jayhawks get into a huge brawl with Kansas State earlier in the year, but they also got hit with NCAA allegations stemming from the FBI’s investigation of college basketball. There were distractions surrounding this Kansas team, specifically Self, to put it lightly.

Self spoke about the situation on the teleconference and explained that his team really pushed through a lot of difficult times during the season. He even explained that he’s looking for a way to memorialize this team.

“For this team to bring so much positive attention in a year where we definitely needed it and operate under pressure and operate under expectations, this team deserves more credit than any team I’ve ever coached,” Self said. “Nobody had a better season than we did.”

At the end of the day, Self and the Jayhawks will likely be named national champions, but even if they aren’t, with that No. 1 next to their name in the last coaches poll of the 2020 season, they’ll be remembered, unofficially, as the 2020 national champs.

Well, at least by Kansas fans.

Sidenote: it would be incredible if the NCAA recognizes Kansas as national champions and then they immediately get it taken away due to the FBI investigation. Talk about an all-time move by the NCAA.