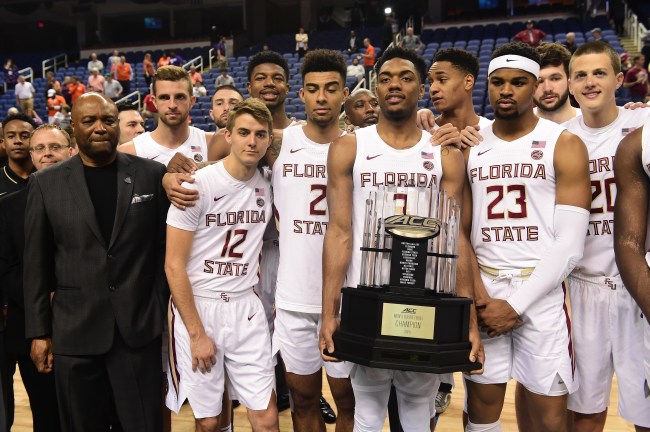 The postponement of the ‘March Madness‘ 2020 NCAA Men’s Basketball Tournament seemed inevitable for days before it was officially announced. It’s devastating on a scale that my tiny pea brain can’t even begin to comprehend. The seniors having played their final games without even realizing it. The families who spent countless hours traveling to youth league games all across the country for years all leading up to this moment of getting to see their son play in the NCAA tournament. The regional small businesses who stocked up and were relying on the incoming revenue from this tournament to boost business. All of that wiped out because of COVID-19.

On a personal level, I was excited to watch my alma mater FSU compete for the National Championship. They won the ACC regular season for just the second time in the program’s history and were set to be the #1 seed in the ACC Tournament. Who knows what the future held in March Madness. A possible #1 seed if they won the ACC? A Final Four appearance??

Florida senator Joe Gruters went to FSU for his undergrad degree. He actually represents the district I live in. And on Friday, after the NCAA Tournament was canceled/postponed, he introduced a resolution in the Florida Senate to name FSU Men’s Basketball as the 2020 National Champions. 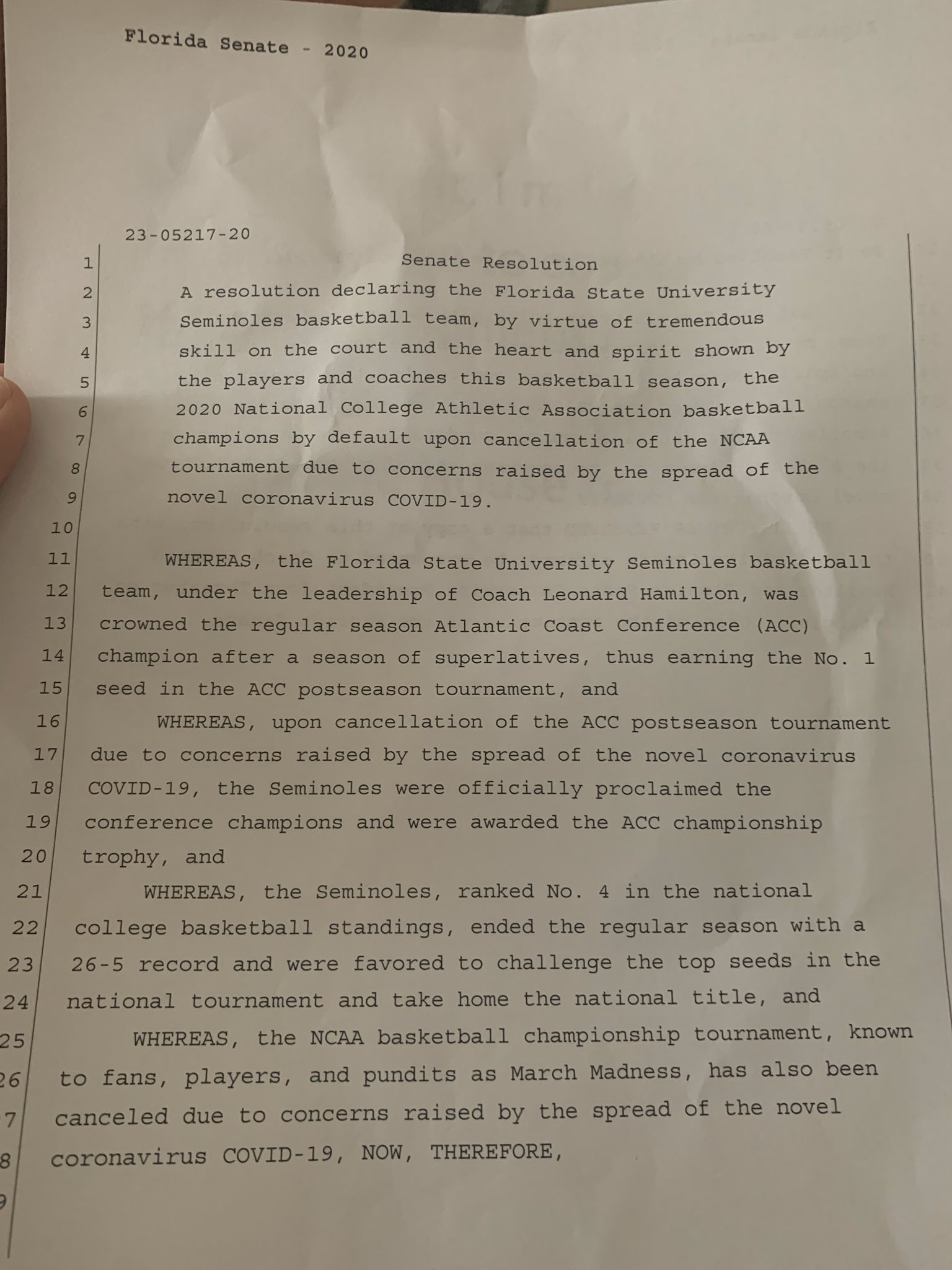 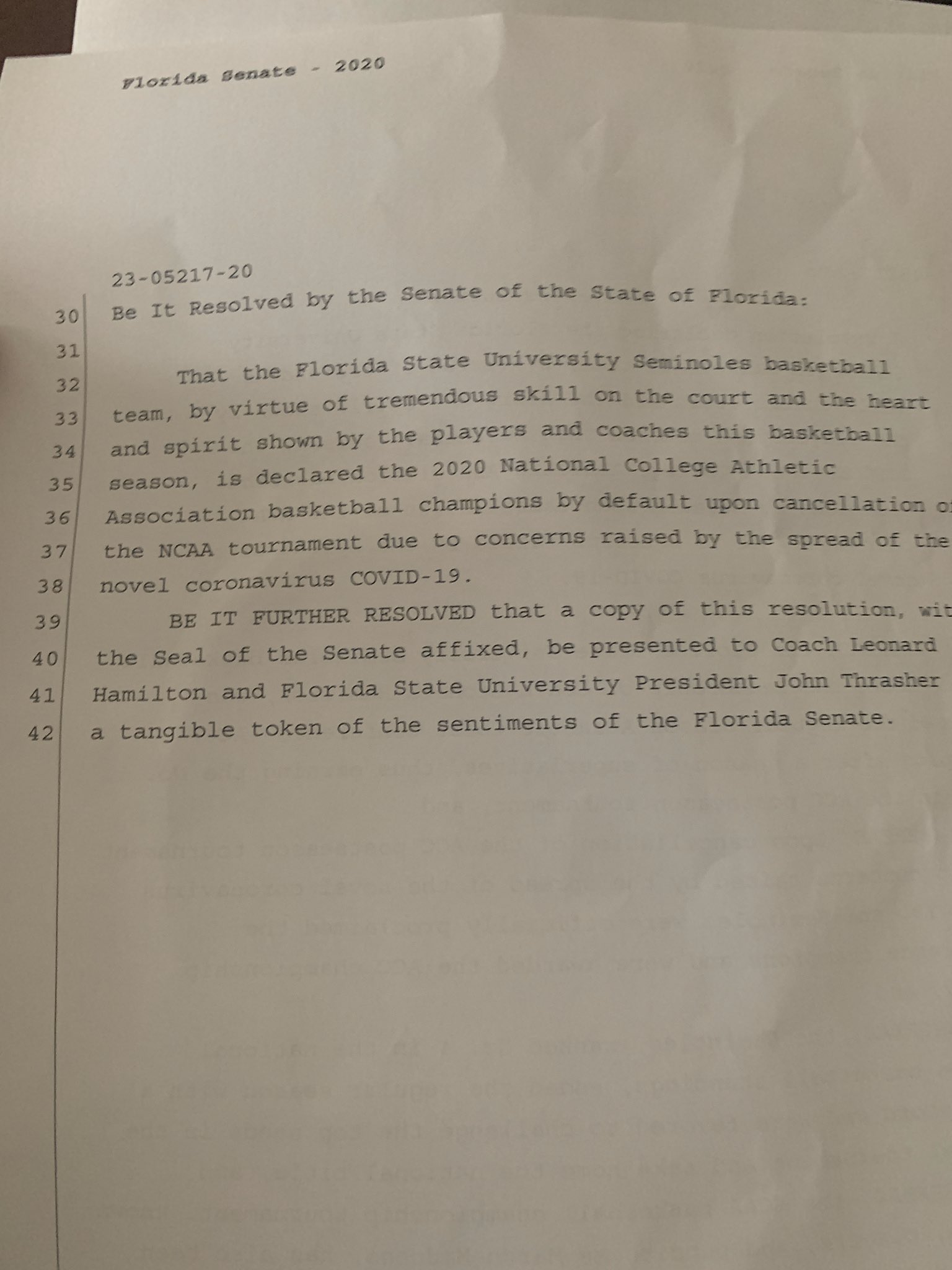 Part of the resolution reads:

“Be it resolved by the Senate of the State of Florida: That the Florida State University Seminoles basketball team, by virtue of tremendous skill on the court and the heart and spirit shown by the players and coaches this basketball season, is declared the 2020 National College Athletic Association basketball champions by default upon cancellation of the NCAA Tournament due to concerns raised by the spread of the novel coronavirus COVID-19.”

I introduced a resolution today in the @FLSenate declaring the @FSUHoops Team National Champions. The cornovirus will continue to impact all areas of our life but this is Florida State’s year. Congratulations to our 2020 National Champions and Go Noles! #FSU pic.twitter.com/TWOswfSt5T

This passed on Friday with a 37-2 vote and the Florida State Seminoles were named National Champions but some dudes in Tallahassee who don’t have the authority to do so and probably had a million other more important things to be working on but I’m sure this moment of light-heartedness cut the tension on the floor with everything that’s going on.

Just like 99.99% of college football fans, I laughed when UCF named themselves Football National Champions. From the outside, it seemed sad. Really sad. They thought they deserved a seat at the Big Boys Table™ but they never got one and instead decided to award themselves the title. I’ve seen countless ‘UCF National Champions’ bumper stickers and shirts around Florida. All of them meaningless just like this vote in the Florida Senate.

Now, as an FSU grad, I find myself in the same situation as many of those UCF fans. Do I ironically embrace my alma mater’s faux Natty and pick up some sick merch from Target and one of those commemorative license plates because I appreciate the absurdity of this and how fucking stupid it is in the grand scope of things with everything happening around the world? Or do I do my best to ignore that this ever happened?