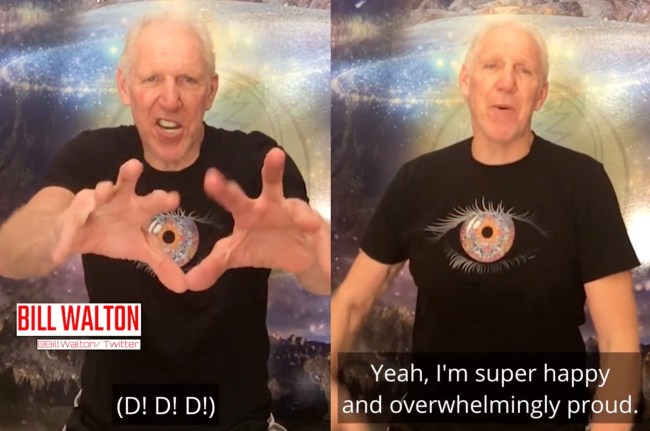 There’s nothing in sports quite like the whacky chemistry between Dave Pasch and Bill Walton in the broadcast booth. Pasch is level-headed and collected while calling college basketball on-air, while Walton eats peanut butter, rambles about mountain biking, and snorts like a buffalo. It’s the ultimate ying and yang basketball experience – an acid-soaked three-ring circus.

Dave Pasch has been with ESPN since 2003, covering NBA, college football, and college basketball in his tenure as an announcer. Before that, he was a radio announcer for the Arizona Cardinals.

Pasch recently agreed to a multi-year extension with ESPN, according to Big Lead Sports. He’s living his dream, telling the Big Lead’s Kyle Koster that “I just hoped to do play-by-play as part of my career… I didn’t know at what level. I never thought I would get to a level where I was doing national games or NFL games and now this will be Year 21 with the Cardinals and Year 19 with ESPN so the fact that they’re willing to continue having me do it for years to come, I’m grateful and at times pinch myself.”

Bill Walton posted a video congratulating his colleague on his contract extension. True to form, he pretened to be a ghost, haunting Pasch. He’s pictured in front of a cosmic background with a Stealie, wiggling in a Grateful Dead reference during the bit.

“I heard the news, the deal went down!”

And a certain longtime colleague seems excited about the news…

What did Bill Walton say?

Anyway, I heard the news! The deal went down. For what, I can’t figure it out. My ears burn off. D!

Whatever. D! D! D! Yea, I’m super happy and overwhelming proud. Here we go! It’s time. Now! What are we waiting for. Forward. Further. More. What could be better?

None of that makes a lick of sense. And that’s exactly why it rocks.