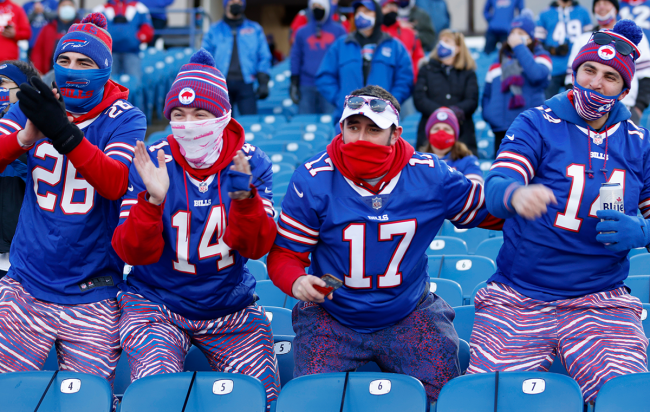 After enduring decades of mediocrity, Buffalo Bills fans will get to see their team compete in the AFC Championship for the first time since 1993 this weekend, and unless you have ties to Kansas City, I don’t know how anyone could resist the urge to hop aboard the Bills Mafia bandwagon.

The “Bills Mafia” label can trace its roots back to 2010, and over the past decade or so, its members have solidified themselves as the most lovable fanbase in the NFL thanks to their penchant for Zubaz, dildo-throwing, and jumping through the folding tables that can be found in Dick’s Sporting Goods locations in the Buffalo area ahead of their upcoming contest.

Dick's Sporting Goods is selling tables in the Buffalo Bills section of the store. pic.twitter.com/dSqZ6yfYve

Earlier this month, GQ published a fantastic article about Kenny Johnson, who is arguably the founding father of Bills Mafia. He’s commonly referred to as “Pinto Ron” in reference to the car he brings to tailgates that routinely attract thousands of fans, where he gives away shots of a 100-proof cherry liqueur from Poland poured into a bowling ball, pizza cooked in a modified filing cabinet, and is traditionally doused in ketchup and mustard before each game.

Bills Mafia is basically the personification of that shithead friend who punches a hole in the wall after getting plastered on peppermint schnapps at a party only to show up the following morning with some spackle because he’s a well-meaning dude at heart. While it feels kind of weird to call them “philanthropists,” I can’t think of another word that best describes everything they’ve done since its members thanked Andy Dalton for helping them snap a 17-year playoff drought in 2018 by flooding the quarterback’s foundation with donations.

That was only the start of their charitable contributions, as Buffalo’s Oishei Children’s Hospital was also at the receiving end of a windfall after Josh Allen’s grandmother passed away last month, and after Lamar Jackson was knocked out of their AFC Divisional showdown with a concussion, his nonprofit got the same treatment, which the Ravens QB recently expressed gratitude for.

Appreciate that #BillsMafia Means A lot not to only me but those kids as well💜💜 https://t.co/fDNjJMpni9

As a result, I wanted to see exactly how much Bills Mafia has collectively donated in honor of the various players they’ve given back to over the years. When everything was said and done, Dalton’s charity received around $415,000, and while these numbers could change, as of this writing, the fund set up for Allen’s grandmother has accrued over $1,140,000 while Jackson’s “Blessing in a Backpack” has netted $454,000.

Who will feed the kids this weekend? You are! #BillsMafia #ChiefsBillsbackpackchallenge pic.twitter.com/XjvqonyTWQ

As a result, Bills Mafia has donated a total of $1.97 million to date, and it seems very likely it’s only a matter of time until that number breaks the $2 million mark. I didn’t think I could love that merry band of misfits more than I already did, but I guess they proved me wrong.