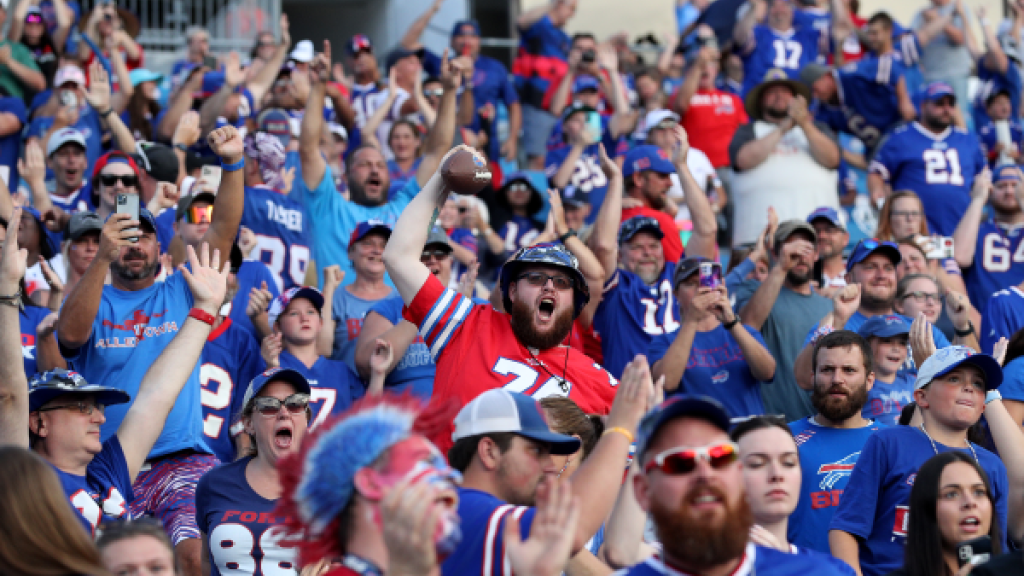 The Buffalo Bills are set to face the defending Super Bowl champion Los Angeles Rams in the NFL’s season opener on Thursday night. Despite having to face the champs in their first game of the season, Buffalo is coming into this season as HEAVY FAVORITES to win the Super Bowl and the Bills Mafia are well aware of those expectations.

A lot of people believe the Los Angeles Rams don’t really have any local fans. They were in Los Angeles from 1946–1994 before moving to St. Louis from 1995-2015 and then back to LA in 2016. The organization really seemed to gain a foothold in St. Louis while the 49ers, Raiders, and Chargers took over the vast majority of California’s fanbase.

The Rams will certainly have gained some new fans after winning the Super Bowl but based on the clips below, the Bills Mafia is rolling DEEP in SoCal ahead of the season opener at So-Fi Stadium. Buffalo’s Bills Mafia held a ‘Buffalo Takeover’ in Hermosa Beach (Los Angeles) on Wednesday night, the eve of the season opener, and it was a rager according to local new

And here are some bartender videos from inside the venues, videos that TMZ Sports tracked down via a local bartender:

And Buffalo News had a photographer on-site to grab a bunch of pictures of the Bills Mafia partying it up, if you want to check those out.

I’m personally a little bummed out there wasn’t a single person jumping through a table in Los Angeles. I’ve yet to get to the So-Fi Stadium myself but hopefully there’s a solid tailgating scene and the Bills Mafia is able to show up in force with some tables to crash through before the game.

Who is going to win: Bills vs. the Rams?

Despite being the road team AND facing the reigning Super Bowl champions, the Bills Mafia will be pleased to know that Buffalo is favored in this game. They are expected to beat the Rams by 2.5-points.

It’ll be a tall task for Buffalo, however. Aaron Donald is looking as jacked as ever in a recent video of him working out with Dwayne ‘The Rock’ Johnson.

It will certainly be interesting to see how deep the Bills Mafia rolls for the season opener. It may not be unrealstic to think there could be a 50/50 split of fans in the stands.